A Memoir & ‘Bildungsroman’ Of Literary Criticism 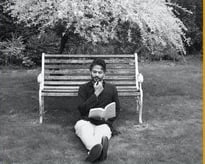 In his maiden appearance at the English Department of Utkal University in April 2011, Chandrahas Choudhury chose to speak on “Staying in Literature”. On a subsequent visit to the Department in September 2017, he slightly modified the topic and called it “What is Literature For?”, thereby retaining the emphasis on literature. Now that his latest book, out in November this year, is called My Country is Literature, many of us who listened to him on these two occasions might claim to experience a feeling of déjà vu. But nothing will be more deceiving than this impression. For the book, ostensibly a collection of literary criticism that Choudhury churned out weekly and monthly for books pages of newspapers and book review magazines from, say, 2002 to 2009, and then sporadically from 2009 on, is Choudhury’s fullest and most candid statement yet on how he was initiated into a life in literature, starting from the much derided position of a ‘jobbing writer’. While the 60 reviews and review essays on novels and non-fiction, included in the book, can add up to a total picture about Choudhuri’s style of thinking and writing about literature and its relations with self and the larger society, the real highlight of the book is a long 37-page introduction under the title of “Books of the Twenties, Or How I Became a Literary Critic”.  This gives My Country is Literature the invaluable and singular status of a ‘biographia literaria’ in Choudhury’s oeuvre. The introduction is also his autobiography, the first he has ever attempted, and reveals how much of a compatriot he is in terms of an inherited Odia middle class ethos and also how unlike us in not having succumbed to it.

Choudhury tells, in loving and lingering detail, about how a chance encounter with an advertisement on the notice board of the Cambridge University Students’ Union changed his life forever. It was an advert, calling for book reviewers. What especially got him going was that it was a ‘paid opportunity’. It was a time of acute financial crisis for him, with funds for his future study at Cambridge drying up. Adding to his sense of uncertainty was the looming family crisis, with his father laid low in a hospital bed, fighting for his life. Becoming a Cambridge Don, by honouring his father’s first fervent wish, seemed beyond the realms of possibility. Becoming a bureaucrat, the next item on his father’s wish list, was a strict no-no as far as his personal predilection went. There had to be a third way. Destiny also seems to have willed it.

His father had given him a profound love of books from an early age and that made reading his solid intellectual capital. Unfortunately, any outlet for the transforming use of this resource seemed denied by the standard academic setting of a university – albeit of a hallowed university like Cambridge – that mandated the writing of banal term papers and those on-the-spur-of-the-moment essay-type answers that are feverishly knocked off in yearend examinations. Now at the prospect of the paid writing opportunity, a door seems to have opened, although only a crack, to a different engagement with literature. Choudhury reveals how he pushed the door open with gusto and stepped out on to a new road, leading to the spacious and variegated country of literature. It was like a symbolic rebirth for him. The essays in the book go on to document Choudhury’s progressive possession of the territory, first in a broad and abstract sense, and then in a specific sense as an Indian writer trying to make sense of his heritage and writing back to the world from that point of anchorage. For good reasons, these later essays on the Indian writers such as Ashvaghosha, Bankimchandra, Rabindranath, Fakir Mohan, Bibhuti Bhusan, Saratchandra, Gopinath Mohanty, Perumal Murugan, though written later, come first in the book.

The introduction goes on to elaborate beautifully on this different engagement. To this reviewer it seems to boil down to two things: one, a shift to the point of view of the producer rather than the consumer and, two, ‘middle path’. This needs explaining. A fact that bedevils the institutional study of literature is this: students in an academic setting read ‘great’ writing in response to which they come up with ‘little’ writing, namely criticism. The latter is ‘little’ not merely in the literal sense of being small scale and slight compared to the largeness and rhetorical plenitude of literature but also in the metaphorical sense of being a self-confessedly unequal partner of the discourse it sets out to expound. In the reckoning of the American critic Robert Scholes in his book The Rise and Fall of English (1999), this tendency leads students to become anxious and nervous ‘hypocritics’ rather than confident and glorious producers.

The present reviewer had, in his 2014 book of essays Model of the Middle, tried to hint at a solution to this crisis by harping on the ‘middle path’ of literary journalism. He had not, however, imagined anything on the scale of what Choudhury has done, advocating passionately for the modest hack work, contextualising it precisely, analysing its nature incisively with a view to its spirited construction, and thereby elevating the review from ephemera to art. The author’s contention is that the review if lustily written by someone becomes literature itself apart from mediating between the writer and the wider reading public. The creative definition of a literary critic, proposed at this point by the author, is a game changer: “… a literary critic is someone who uses his/her best sentences in the service of someone else’s books” (xviii).

Choudhury further qualifies ‘best sentences’ by saying that these inevitably arise from pitching for the middle style by steering clear of the extremes of abstruse, jargon-ridden writing and writing that is either turgid or pedestrian. He tells us how by fashioning himself as ‘a cross between a bibliophile and a small entrepreneur’ (xviii) – we have heard it said that a review is a ‘small crafts industry’ and a reviewer a ‘literary tourist’ (E.P. Epstein) – he was able to chart a ‘middle path’ (xvii-xviii) and gain a foothold in the country called literature. Not satisfied with this limited membership, he went on in the years that followed since 2009 to claim full membership by setting himself up as a fiction writer. The literary criticism he produced as a fiction writer, imaginative and crackling with clarity, energy, wit and grace, is of a piece with literature itself.  The essays in this book on the early Odia feminist novel Basanti, written by 9 authors, Perumal Murugan’s fictional trilogy, Romila Thapar’s Talking History, Senapati’s Chhamana Athaguntha and, interestingly, on Jonathan Bate’s 2009 book on Shakespeare, to name only a few, constitute eloquent proof of this.

My Country is Literature is Choudhury’s fond and timely act of looking back at his years of literary apprenticeship that, starting in Cambridge, played itself out in full in the city of Mumbai, thus helping to catapult him to Delhi and to the whole wide world as a confident Indian writer in English.  That ‘bildungsroman’ is in glorious display in the book in the form of the writer’s elegant sentences, taking us into the interiors of an array of fiction and non-fiction books from India and across the world. Published in an arresting jacketed hardback with a lovely front cover, displaying a photo of the reading author, and interspersed with Golak Khandual’s pencil sketches of some select writers,  this is a must-have book for the aspiring writer of and on literature.

This Cow Had To Undergo Surgery For A Strange Reason; Know Details