A War We Must Win 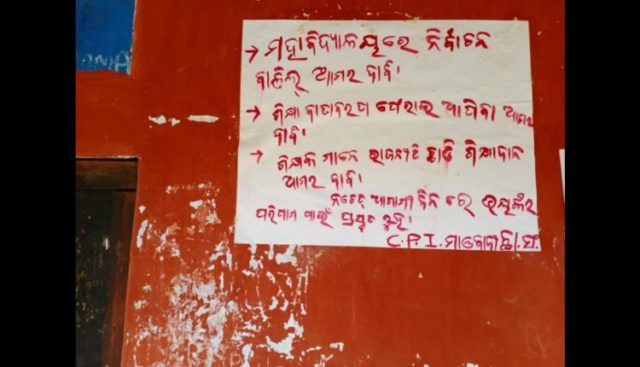 The Odisha government recently declared five districts free from the threat of Maoist radicals. The districts of Angul, Boudh, Sambalpur, Deogarh and Nayagarh will no more require support under Centre’s Security Related Expenditure (SRE) scheme to fight the menace of Left wing extremism. With this the total number of districts ‘liberated’ from the Maoists in the state since 2018 has gone up to 11 which should be a matter of great satisfaction both for the state and the Centre.

Who should we give credit for this achievement? The state police force, especially the jawans of Special Operations Group (SOG), no doubt deserve praise. Apart from conducting joint operations with central paramilitary forces the SOG has carried out highly successful missions on its own. The men of this crack force earned their stripes in the Gasma operation launched to nab the rebels who had attacked the Nayagarh police armoury in 2008.

State police also has other successes against Maoists to its credit. One of its biggest moments was the gunning down of 13 ultras in Malkangiri in September 2013 in an operation led by then district superintendent of police, Akhileshwar Singh. It proved to be a turning point for the force, raising its morale on the one hand and dealing a crushing blow to the Maoist movement in the region known as its stronghold on the other.

The Odisha government’s two-pronged strategy of intensifying the coercive drive against the rebels while simultaneously stepping up developmental activities in the areas of their influence has also paid dividends. Members of the tribal community who, cut off from all kinds of development had been playing into the hands of the radicals, are now singing a different tune. In the last few years there have been several instances of indigenous ‘adivasis’ turning upon the gun-toting rebels and driving them out of their areas. They have realized the hollowness of the doctrine of power flowing from the barrel of the gun. Members of the community now crave for better educational and health facilities and, even more importantly, better transport and communication infrastructure like roads and bridges.

The importance of communication infrastructure in such areas is evident from the positive changes that the Swabhiman Anchal (once known as the ‘cut-off’ belt because of its difficult topography) of Malkangiri, a known Maoist bastion, has seen since the inauguration of Gurupriya bridge by Chief Minister Naveen Patnaik in 2018.

The bridge, which has linked the area by road with the district’s mainland for the first time since the sixties, has opened new vistas of development. The villages of Swabhiman Anchal with a population of around 25000 are seeing metalled roads for the first time. Panchayat offices in the region are becoming functional and people are beginning to dream of good education for their children.

Simultaneously the bridge has made it easy for security forces to launch decisive operations against the rebels holed up in the hills and jungles of this rough terrain. No wonder the area which had earned notoriety as a Maoist stronghold following the kidnapping in 2011 of then Malkangiri collector R. Vineel Krishna now seems to be slipping from the grasp of rebels who have never supported developmental activities.

While the government’s two-pronged strategy against the ultras seems to have yielded good results the Maoist movement itself has suffered greatly because of its increasing lumpenisation. With its appeal on the wane it is no more able to mobilise the same kind of support among the tribal communities who once constituted its backbone. The government, thus, seems to gained an upper hand in the war against the ultras for the first time in the last few decades. It should make the most of this opportunity.