Age Of Faux Punditry: Media Experts Disappoint Us, But They Are Here To Stay 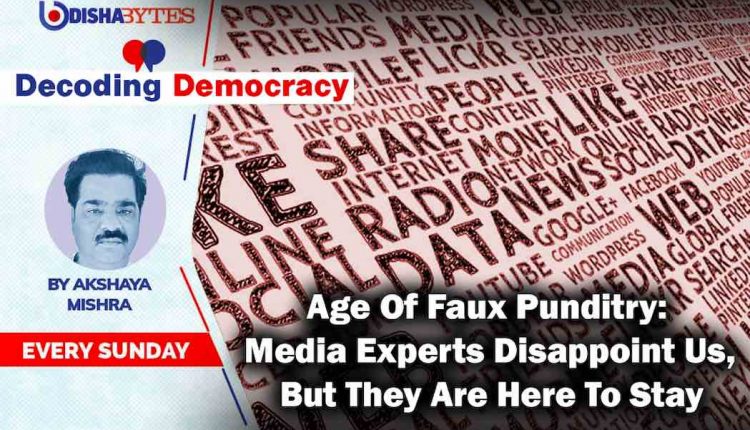 There is no escaping media pundits. They are out there, on our television screens, social media posts, and newspapers, pontificating on anything and everything and throwing predictions to sway our minds with the confidence of a seasoned con artist. Overawed by their articulation and assuredness, we suspend our own ability to reason and exercise common sense. Awe still at work, we quickly forget when the predictions fall flat – and fall flat they do with embarrassing regularity. We suspend reason once more as they get into a new round of pontification again.

Have you noticed, if you follow elections, how often the experts go horribly wrong with their assessment of results? All their analyses and data-crunching just crumble as the final tally begins to take shape. Think of all election results – West Bengal, Delhi, Uttar Pradesh, Odisha and the general election of 2019, for example – and wind back to all predictive analysis done in television studios and on websites and elsewhere. You are likely to lose all respect for those knowledgeable souls.

Is media experthood a hoax played upon us, particularly in political and economic matters? Are they like any of us, just ignorant or as informed but a lot smarter with words? Fortunately, some research has gone into the subject and it offers interesting insight. Let’s begin with an excerpt from the jacket of journalist-author Dan Garden’s Future Babble, a wonderfully researched work on the phenomenon of experts.

Let’s face it, experts are as accurate as dirt-throwing monkeys. And yet every day we ask them to predict the future – everything from weather to the likelihood of a deadly terrorist attack…’

Canadian-American researcher and political science writer Philip Tetlock, who studied over 27,450 judgements about the future from experts – these included political scientists, journalists and economists – over a period of 20 years, made some startling discoveries. Experts are as good at making predictions as any of us, he mentions in the book ‘ Expert Political Judgment: How Good Is It? How Can We Know?’ Referring to his work, Gardner writes: “Some experts are so out of touch with reality, they are borderline delusional. Other experts are slightly out of touch. And a few experts are surprisingly nuanced and well-calibrated.” We don’t need to think hard which category does well in the media.

The last one is the least appreciated. As Gardner mentions: ‘Expertise means more knowledge, and more knowledge produces more detail and complication. More detail and complication make it harder to come to a clear and confident answer. At least it should make it harder…’ Those involved in political surveys would acknowledge that facts from the ground don’t always align to deliver a clear, indisputable conclusion. The more you collect data and the more you analyse them, the more difficult it is. In case of human beings, data can be fickle. No wonder opinion and exit poll results in India vary so much among themselves and from the final result.

From the perspective of the average viewer, such experts are of little help. Tetlock’s survey found the bigger the brand name, the worse was the accuracy of predictions. Minds uncluttered by complicated facts, they would make emphatic, definitive assertions. They are more dramatic, more articulate and are better at providing catchy sound bites. The media love them because they attract eyeballs; we love them because they don’t leave us more confused than we already are.

Gardner offers an explanation: ‘As for why we believe in expert predictions, the answer lies ultimately in our hard-wired aversion to uncertainty. People want to know what is happening now and what will happen in future, and admitting we don’t know can be profoundly disturbing. So we try to eliminate uncertainty however we can…’

That’s one reason why despite the progress of science, soothsayers, crystal ball gazers, astrologers, tea-leaf readers and all those in the business of prediction are never out of business. We would rush to them when we have no clear answers to our troubles. He also refers to the psychological trait called confirmation bias. It means we have already formed our opinion or conclusion on matters; we only need someone to endorse it strongly. We try to be selective with facts and align them with our opinions. We would eliminate those not in agreement with our views. This explains why we would keep watching television channels and websites more in sync with what we have already concluded. The clever expert is always aware of the pulse of his audience. He would supply what they need.

The media pundits of the fraudulent kind know they would go unquestioned despite being way off the mark with predictions because they carry the sentiment of their audience with them. They would be forgiven even when they are wrong; their brand would shine brighter if they are right.

So they are not going away in a hurry. The expansion of the media means their ilk will only get bigger. The only way to make them irrelevant is to get real experts into the frame and get the intelligent conversation going. But they are boring. They won’t tell us good, pleasing-to-the-heart stories. We need entertainment too, don’t we?

Bhubaneswar Bali Jatra Gets Official Approval To Open Next Month

Extended School Holidays In Odisha & Other States This Diwali