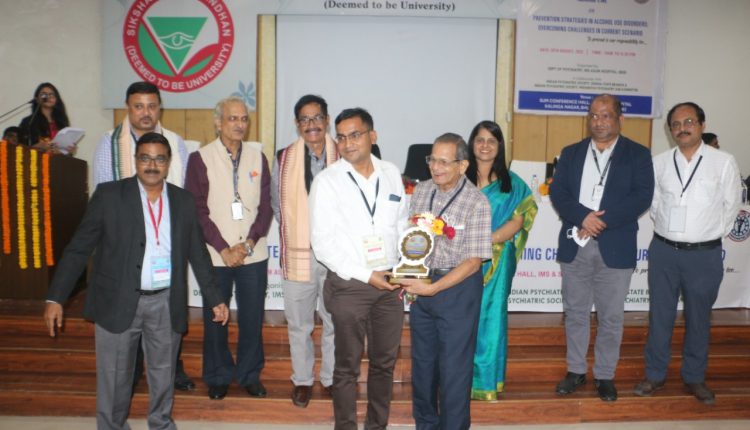 Bhubaneswar: Alcohol intake is responsible for around three million deaths every year worldwide accounting for 5.3 per cent of all demises requiring measures to curb drinking habits, an eminent psychiatrist said.

“Liquor claims 2.6 lakh lives in India and is the causal factor linked to more than 200 diseases,” President of the Indian Psychiatrists’ Association Dr NN Raju, said while delivering a lecture at an event at the Institute of Medical Sciences and SUM Hospital here recently.

The death of 7.7 per cent of men and 2.6 per cent of women worldwide was linked to alcohol while 13.5 per cent of total deaths involving people in the age group of 20 to 39 were attributable to it, he said.

Speaking on the topic ‘Prevention Strategies in Alcohol Use Disorders: Overcoming Challenges in the Current Scenario’ at a National Continuing Medical Education (CME) programme jointly organised by the Department of Psychiatry of IMS and SUM Hospital and Indian Psychiatry Society, he said alcoholism was an illness characterised by preoccupation with alcohol and loss of control over its consumption.

Raju said India accounted for 65 per cent of the alcohol production in the world, a substance which was linked with many psychiatric disorders like depression, anxiety, psychosis and acute stress disorder which often led to suicide. “Alcoholic intoxication is linked to 22 per cent of all suicide deaths while 20 per cent of all non-traffic injury deaths are suicides,” he said adding alcohol was responsible for around 38,000 traffic accidents in India during the last three years.

He further said those addicted to alcohol continue with drinking though they were aware of the physical and psychological problems they would encounter if they didn’t kick the habit. Addiction led to the person getting detached from important social, occupational or recreational activities, he added.
Pointing out that it was for the administration to ensure that alcohol’s negative influence on health and social life was curbed, he said most government policies were formulated with an eye on more taxes without addressing the problem from the public health standpoint.

Four states, Gujarat, Bihar, Nagaland and Manipur, besides Lakshadweep, had imposed either total or partial prohibition but the lack of a single national policy, conflicts between the Centre and states and absence of a rational and scientific alcohol control policy viewed from the public health angle were hindrances for finding a way out, he said.

The governments, Raju said, could reduce the number of retail outlets, introduce a government-controlled wholesale and retail system, restrict the time of sale or increase the price of alcohol while imposing high taxes to discourage addiction.

Software Engineer’s Death In Odisha: Know What Bhubaneswar DCP Has To Say