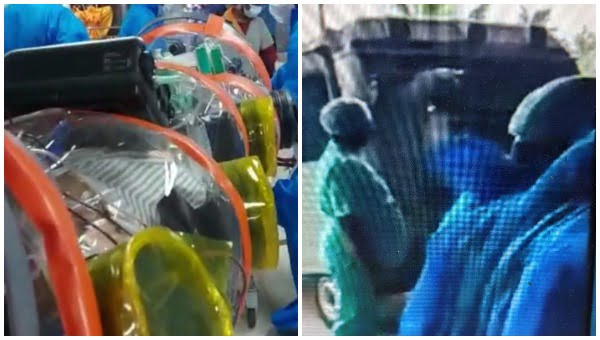 Cuttack: A critically ill COVID-infected, Laxmikant Nayak, was airlifted to a super speciality hospital in Kolkata from a private hospital in Cuttack city on Saturday.

A green corridor was created for the smooth transit of the ambulance from Cuttack to Biju Patnaik International Airport in Bhubaneswar. The 34-km stretch was covered in 30 minutes.

According to sources, the 41-year-old from Junagarh was admitted to Shanti Memorial Hospital here on May 24 after he tested positive for COVID-19. Since there was no improvement in his health condition with pneumonia affecting his lungs and the oxygen saturation level constantly dropping, the doctors suggested shifting him to Kolkata for emergency medical treatment.

The family members then sought the help of local MLA and Minister of State for Home Dibya Shankar Mishra.

Laxmikant was taken in a special ambulance from the COVID ward of the hospital by a 4-member team of doctors from Delhi to the airport and then shifted to Kolkata in an air ambulance.

“All possible support including technical was provided to the patient for a smooth transit from the hospital to the airport. This was possible due to the well-concerted efforts of the hospital, CMC and BMC Commissioners as well as Commissionerate Police,” a hospital spokesperson told Odisha Bytes.

Earlier, Vigilance Director Dr Debasis Panigrahi and another youth, Abhishek Mohapatra of Basudevpur of Bhadrak, were also shifted to Kolkata from Bhubaneswar through an air ambulance for advance (Extracorporeal Membrane Oxygenation) ECMO treatment.

Amrit Pradhan, a software engineer from Odisha, was airlifted to Chennai from AIIMS-Bhubaneshwar after his family and friends managed to raise Rs 70 lakh for his treatment through crowdfunding.

Meanwhile, the state government has floated tenders for procuring these machines from foreign countries as these are not manufactured in India. The machines will be installed at SCB Medical College and Hospital here and Capital Hospital in Bhubaneswar.

At present, only two private hospitals in Odisha have one ECMO machine each.

COVID-Induced Lockdown: Will Odisha Initiate Unlock Process In These 12 Districts?

The Santan Shoe On A Prime Day; You Can Trademark Gestures Too!