Being A Single Woman In India 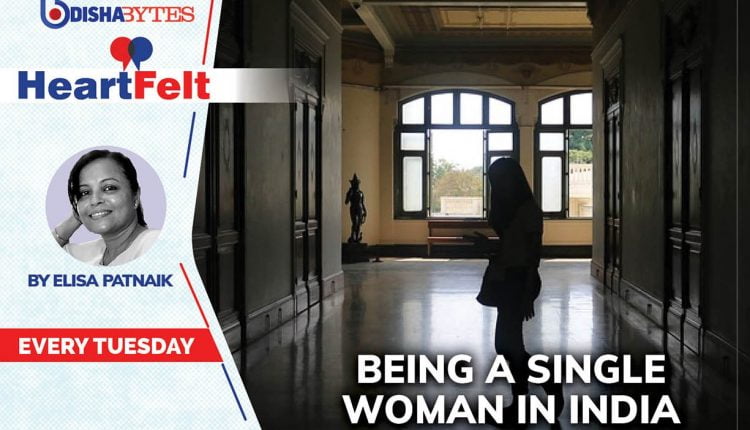 A single female colleague of mine in her early 30s, who had recently shifted to Bhubaneswar, was frantically looking for a house. She soon started panicking when she was unable to find a house despite scouting rigorously for over a month. The houses or the apartments of her choice and suitability were either reserved for only families or married couples or came with an impossible set of rules laid down by the house owners.

Dejected and exhausted at her house hunting experience, she finally settled for a house closer to office which suited her budget, but nevertheless came with a list of caveats from the house owner who resided on the ground floor. The list included conditions such as – No male visitors except father or ‘real’ brother, to be in by 8 pm unless in an emergency situation, present the names of three friends who would be visiting her and big ‘No’ for parties. She was even made to sign the list along with the agreement!

Another female friend who got separated from her husband after 15 years of marriage was not able to find an apartment for her and her son in the same city that she had stayed in for more than a decade. As soon as she would finalise a house, the house owner would be curious about her ex-husband, the reason for their divorce and whether she would be able to pay the rent despite my friend assuring that she had a stable job in hand. She finally had to settle in for a common friend’s
apartment who knew her personally.

The challenges are not just limited to accommodation, single women in India, face multiple hurdles and gender bias in every sphere of their personal and professional lives. Unmarried, divorced, widowed women are judged, humiliated, harassed and questioned about their lives and choices and their privacy constantly intruded upon. They are more or less objects of interest, pity, or gossip.

My young colleagues, cousins and nieces narrate the way they are relentlessly questioned on their single status, especially by extended family members and acquaintances in family functions and other gatherings. It is always assumed that if a woman of marriageable age or beyond is residing alone, then there’s definitely something wrong with her. It doesn’t matter how qualified, educated, efficient or
civilised she is. Her single status assumes primary importance over everything else.

“Everybody is busy match-making for me or showering me with marriage proposals not understanding that I don’t want to get married now,” says my friend’s sister in her early 30s. “Even in a progressive work culture like mine, I am asked in a friendly way why a good-looking woman like me has still not married.”

I remember the way my land lady in Delhi used to question me and my roommates the way our parents had ‘left us unsupervised’ to fend for ourselves. We were budding journalists who used to reach home late in the evening which she found it difficult to digest and accept. “What is this job that you do which requires women to come home so late?,” she would often question.

Our society and people find single, independent women managing their own lives not only inadequate but also an aberration. They are even considered as ‘failures’ even if they have highly successful careers and lead meaningful and fulfilling lives, just because they do not have a husband and a children to flaunt.

A woman’s identity in India still revolves around her marriage and marital status. Following the footsteps of patriarchy, most girls are raised with the ultimate goal of finding a good and prosperous husband and to be an ideal wife and daughter-in-law. And nonconformity to this established norm is considered as an abnormality to be questioned, commented upon, and discriminated against.

There are assumptions galore associated with a single woman. When a woman says she is single by choice, it’s typically assumed that she has either gone through a tragedy, leads a forlorn and depressing life or is not of respectable character and is ‘readily available.’ They are even considered as man-haters or lesbians.

A friend shares how she used to be compelled to justify her single status to all and sundry. “For years, I was made to feel as if I made a terrible choice by remaining single when in reality I was leading a much more accomplished and rewarding life than many of my married friends, colleagues, and relatives, she says. “It took me a few years to finally stop responding to such questions and I felt liberated and at peace.”

Several women who move away from home to follow their dreams and ambitions and lead an independent life have to struggle with discrimination at every step.

Renting an apartment in a good locality is a struggle as house owners don’t like to rent to single, women. Even in this age and times, a single woman living an independent life, away from her family is always assumed to have loose morals with umpteen male friends, lead a cavalier lifestyle with scant regard for values. “I am always on tenterhooks for my land lady to reprimand me on something or the other. I always tell my male friends who drop me to leave me at a distance and not in front of my PG accommodation as I always find her monitoring my movements and visitors,” shares a friend.

Remaining single is still a taboo in the Indian society and culture and is generally looked down upon. Single women often face a lot of discrimination, social stigma and are stereotyped, sometimes leading to social marginalisation. “My neighbours were quite curious about my life and my marital status when I was staying alone and I was also concerned about my safety and security. I was not even invited for community functions. But  there was a shift in the attitude of people when I moved in with my parents. As if being with my family was reassuring for others,” says my middle-aged aunt who is a college professor.

Author and journalist Sreemoyee Piu Kundu’s book, “Status Single: The Truth About Being a Single Woman in India” recounts the lives and experiences of urban single women from across the country. The author also narrates her personal experiences and struggles of being a single woman which she describes as challenging, eye-opening, difficult, and sometimes embarrassing. Importantly, she talks about the culture of stigma, shame, silencing, stereotyping, slut-shaming ascribed to being single, no matter how professionally accomplished a woman is.

The popular culture definitely has a role to play as they perpetuate the perceptions, assumptions and hegemonic images associated with single women – the partying young girl, the tragic widow, the cantankerous spinster, or the frustrated divorcee.

Very few single, independent, and successful women are portrayed as leading accomplished and perfect social lives with a normal and healthy lifestyles.

The choice of many women to remain single is still unconceivable to many, even though they might be leading much more fulfilling lives than their counterparts. I know and admire many such women who lead full lives with their busy work schedules, social commitments, pursuing their interests and passions. While some do not feel the need for marriage or the added responsibilities of another family,
others do not want to sacrifice their freedom and time for their family alone and consciously decide to remain single.

“Single by Choice,” is another book edited by journalist Kalpana Sharma, which is an anthology of 13 essays penned by unmarried women who are comfortable, content, and happy in their singlehood status.

The women speak about the liberation of being single as well as the societal pressures and loneliness. The happily unmarried women ranging from the mid-20s to 60 and above are writers, scientists, journalists, lawyers, academicians, and entrepreneurs. They share an array of issues, perspectives, and experiences which single women undergo in India.

With more and more women choosing to remain single, free, and happy and not tying the knot for the heck of it, the tags of ‘proud to be single’ and ‘single and happy’ is gaining momentum. What we need is genuine acceptance, solidarity and respect for women’s choice and their singlehood identity.