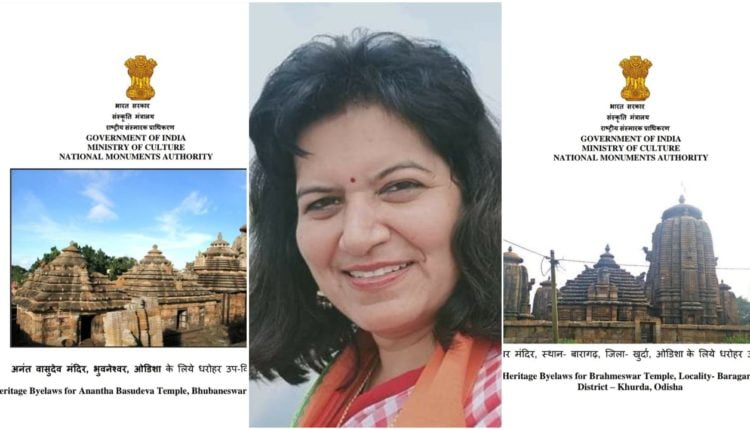 Bhubaneswar: All eyes are now on Bhubaneswar MP Aparajita Sarangi’s press meet at 4 pm on Monday.

Earlier, the bureaucrat-turned-politician was criticised for her silence over the controversial draft heritage bylaws notification for temples in Odisha with ‘missing’ posters pasted on city walls and the hashtag #AparajitaMissing going viral on social media.

Later, the MP who was then attending the Budget session of Parliament in New Delhi, had promised to be back in her constituency on February 15 and speak on the issue at an appropriate time after holding talks with all the stakeholders.

The notification recently released by the National Monuments Authority for Puri Jagannath Temple and Ananta Basudev and Brameshwar temple in Bhubaneswar had caused a stir in the state as it blocked the way of the development projects in the Pilgrim Town and Ekamra Khetra. The government had also raised concern over the impact of the bylaws on the livelihood of sevayats and the rituals at the temples.

Following the uproar, the Centre withdrew the draft heritage bylaws for Srimandir on February 8. Union Minister Pratap Sarangi on Sunday informed that the bylaws for the temples in Bhubaneswar will be withdrawn soon.

With the controversy now nipped in the bud, the MP is likely to spell out the reasons for her silence over the issue as she had mentioned during her Twitter spat with Kendrapada MP Anubhav Mohanty on February 13.

Anubhav had tweeted about her reluctance to accompany the BJD MPs to meet Union Culture Minister Prahlad Singh Patel and said that he felt sad over the non-cooperation of BJP MPs from Odisha in such an apolitical issue involving State honour.

Nothing is done without a reason.I will speak at the appropriate time. Please wait and watch.Regards. https://t.co/4CNxhi54lk

Pride Of Odisha: Silu Nayak & Others Praised By PM Modi In ‘Mann Ki…

This Is Why Amitabh Bachchan Underwent A Surgery! Bollywood Star Clears Air On…

LPG Cylinder Up By Rs 25 Again! Know How Much It Will Cost…