Campus Calling: Growing Up In The Lap Of Bhanja Bihar 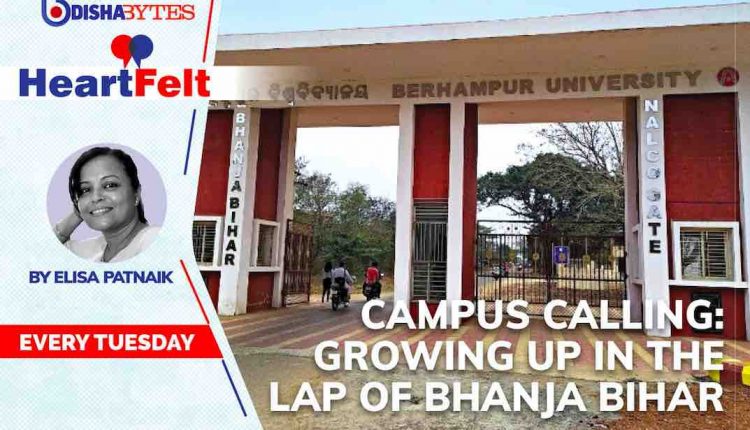 An idyllic, enjoyable, safe and cherished childhood spent amidst nature, friends and siblings is a blessing. And for those of us who have had the good fortune of spending our childhood and adolescent years in Bhanja Bihar campus of Berhampur University in the ’80s and ’90s are truly blessed.

Campus lives are always memorable, full of camaraderie and lifelong friendships. But what marked our childhood spent in Bhanja Bihar was beyond that. A place lined with casuarina trees, enveloped by mango and cashew nut orchards, surrounded by hillocks and just 4 km from the Gopalpur sea beach. It also had a helipad where famous personalities used to land during their visits to southern Odisha. Along with basketball and badminton courts and a deer park too.

The campus was our oyster and we could play, hop, roam and do anything that we wanted. As the clock struck 4 pm we rushed out. Evenings were spent playing a lot of physical games – cricket, badminton, gilli danda and cycling. Each small colony had its own playground and it was filled with chattering, exuberant and sweaty kids. We were lucky to have badminton and basketball courts too if we wanted to play a disciplined game!

A favourite pastime was plucking mangoes and cashew nuts from the orchards and trees scattered across the campus. Come summer, it was too great a temptation to let go off. Aiming for the most luscious treasures hanging from the trees with stones was a favourite game of many children. The orchards were given on lease to the locals, who used to threaten the boys but to no avail. Collecting ripe cashew nuts surreptitiously, roasting them over fire lit in our backyards and eating the sweet smoky kernels with our sooty hands was a delight.

The campus was rich in flora and fauna, lush with greenery all around. Our forays into the mini forests led us to wild colourful orchids, fragrant kewda bushes and wild edible berries which we used to love eating. Climbing trees was another much-loved interest. Climbing the numerous phalsa and guava trees during the season and coming home with our hands overflowing with ripe luscious phalsa berries and guavas had an unparalleled joy of its own. The natural surroundings also encouraged a host of reptiles and insects, cohabiting with us. Encountering a variety of snakes and frogs, most of them harmless, was a common sight both inside and outside our houses!

We had huge double-storey quarters with multiple balconies, backyards and gardens in front. Every house had a flower and vegetable garden filled with seasonal flowers and vegetables. Watering the plants every other day used to be a daily chore for us children along with the distribution of vegetables and fruits like bitter gourd (karela), pumpkin, drumsticks, banana, mangoes which grew in abundance to our neighbours.

A part of the campus was surrounded by hillocks overlooking the neighbouring villages. The nooks and crannies in the hillocks resembled caves, acting as the perfect setting for our adventures where we swapped our roles as pirates, police officers rescuing our fellow people. One of the bigger hills gave way to a short-cut path leading to the Gopalpur sea beach and I remember going on our first trek of 4 km to the beach along with my brothers and friends.

Celebration of festivals like Holi, Ganesh Puja and Saraswati Puja together with friends and neighbours was another highpoint. Holi was a never-ending affair, from morning till late afternoon. We used to leave our houses armed with small buckets, colours and pichkaris and wandered throughout the campus in boisterous abandon eating snacks in each other’s house and plucking the first baby mangoes of the season. Forest feasts were also fun where gangs of various age groups got together to cook a meal in the thickets.

Every year, the university students had a musical night in the open-air auditorium from where we could listen to the live orchestra, sitting in our balconies. We were not allowed by our parents to be there as it went on till late at night. But sitting in the balcony listening to live Bollywood hit numbers and old Odia film songs till midnight made us feel a bit like adults.

The campus boasted of a few other feathers on its cap. It was next to the helipad or the Rangailunda airstrip, established in the British era during the Second World War where many dignitaries, including Presidents, Prime Ministers used to land on their visits to southern Odisha. The university was also known for hosting national inter-university basketball tournaments, which was an exciting time for us. We used to flock to the matches enjoying them sitting on makeshift audience galleries.

Another exciting period was when the authorities decided to start the Bhanja Film Club where popular Hindi films were screened twice a week for the university staff and their families. So, every Wednesday and Saturday we had early dinner and walked to the auditorium in the Administrative Building to watch the 8 pm shows. Even though as a child I couldn’t fully comprehend movies like Gharonda and Bemisal, I loved being a part of the weekly ritual and shows along with friends and family.

When I look back at those days I am struck by the thought that all of us had our own circles. While my father enjoyed among like-minded academicians who were also our neighbours, I and my brothers had scores of friends of varying ages. Besides her friends, my mother was close to our neighbours and the spouses of my father’s colleagues. Interestingly, the roads crisscrossing the residences, with little or no traffic were where most of the conversations took place. It was a common sight finding groups of people and children huddled over animated chats.

It was a different era then when Bhanja Bihar was blessed to have some exceptionally gifted teachers and academicians who were internationally known for their research capabilities, teaching prowess and astute nature. It was a familiar sight for children to see our fathers, uncles and aunts engaged in rousing discussions while returning from their respective offices every evening.

My father loved spending time in his research laboratory, even on Sundays and holidays with his research scholars. He was a Professor of Zoology and we were sometimes welcomed to the lab alive with mice, lizards and fishes under observation.

Our needs were minimal and necessary ones. We had two grocery stores, one vegetable and stationary shop, a few saloons and tea shops, one meat seller in the campus. The rest of the stuff was purchased from Berhampur. The barber, Raju, used to visit our homes on a Sunday for the mandatory haircuts for me and my brothers. Life revolved around school, studies, friends, family and games. It was simple, uncomplicated and peaceful.

Notwithstanding these golden memories of Bhanja Bihar, it has been heart-breaking witnessing the gradual decline of the once beautiful campus. In the later years, many of the professors preferred not to stay in the official quarters resulting in poor upkeep. With more and more students opting for professional courses, the attraction for higher studies and university education has waned.

Now, as I recollect the indelible childhood moments from the treasure trove of memories of Bhanja Bihar’s golden period, I am overwhelmed with nostalgia for those days. My children love listening to all our childhood adventures and I lament at their sedentary, gadget crazy and stressful lives. I am often reminded of those glorious carefree days in Bhanja Bihar. And how lucky we were to have grown up in such an environment where nature, wisdom and kinship thrived.