Characters & Colours: Manoj Das’ Darling Ghost Is Unlike Many Of The Same Ilk 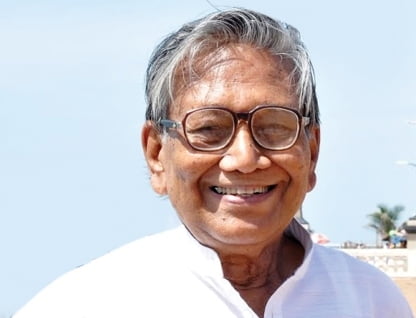 A doyen of Odia literature, Manoj Das left millions of his ardent admirers shattered as he left for his heavenly abode on April 27. A writer par excellence, Das, 87, was a winner of several awards and recognitions including Sahitya Akademi, Saraswati Samman and Padma Bhusan. This weekend, as I sat down to pen my column Das’ unnamed ghost character in one of his short stories ‘Good-bye Darling Ghost’ (Manoj Das Stories: Grassroots, 2003) haunted my senses, almost like Rebecca – apparently everywhere yet actually nowhere.

Das introduces the endearing and ‘breathtakingly beautiful’ ghost to the readers as a girl on the lonely verandah “staring yearningly at the moon and the next moment down at the serpentine bend in the river, tears streaming down her cheeks, thick tears like drops of molten gold.” Far from getting scared, young men aspired to have a ‘fleeting glance’ of her. Descriptions of the ghost were many; however, the writer toys with the idea that those might simply have been ‘feverish imaginations.’ Das’ ghost reminds us of William Wordsworth’s ‘Solitary Reaper’ and there are also shades of a femme fatal when we read about “the fatal consequences of succumbing to her attractions.” The young man’s story of daring to fall in love with the sad, lonely ghost resulted in his ‘mysterious disappearance’. Only a deep cry was heard by an ascetic when the young man bravely crossed the threshold of human fears to kiss the ghost. For generations, writers since the times of William Shakespeare have been obsessed with ghosts and supernatural beings. Readers devour them with an agreeable palate and even those who do not believe in it wonder about the credibility of their existence! But what makes the story in question unusual is Das’ imagination of a human desiring to establish a romantic relationship with a ghost. The situation brings to mind Hardik Mehta’s ghost character in Roohi (2021 film) and how she managed to enchant Kattani. The ghost-human dichotomy is given a comical touch as against that in ‘Good-bye Darling Ghost’.

The ‘gloomy, derelict’ mansion matched the lingering mood of melancholia of the darling ghost. Her love of silence and solitude made her unconventional among the breed of supernatural beings who usually created havoc and screamed a lot to produce terror. A hundred years ago, the ghost was seen as a lovely daughter of white father and tribal mother with “both the fire and wild nature of her mother and the fair skin and chiseled features of her father.” Das’ darling ghost echoes Daphne du Maurier’s Rebecca in some ways. The haunting presence of the beautiful Rebecca overshadows all other characters in Maurier’s novel. The ghost has a similar presence in this story. Rebecca had a streak of rebellion in her and so also the darling ghost who boldly poisoned her masters – the three Englishmen who took over the residence in the indigo plantation where she resided.

The darling ghost had been betrayed – by the keeper of the old mansion. Perhaps, that betrayal did not seem to rub away from her senses even after she died. A strange belongingness towards the mansion kept alive the bond of the ghost with the village. And the villagers sympathized with her perhaps because they knew of her sad past or perhaps because “she cried all night and slept all day, and even in her sleep she’d whimper and sob.” Whether the villagers actually considered the darling ghost one of them or they offered her share in weddings and funeral feasts out of fear is debatable. One of the reasons might have been their belief that she is guarding them:

“Oh, you unfortunate soul! So and so is throwing a feast for such and such reason, and we’re placing your share here. Please eat and be satisfied. And we hope you’ll continue to protect the village from evil as best you can. We’ve done nothing to disturb your peace or to run you out of the mansion, have we? No! And why? Because we treat you like a daughter. May God grant you salvation!”

Many young men, like the protagonist, often had a mad desire to rush to the dilapidated mansion and console the crying ghost. The villagers were shattered on learning about the government’s order to demolish the old mansion where the ghost housed. The character of the ghost is fascinating because she could spell such intense empathy and desire in the young men; so much so that they often played under the palm-tree where her spirit seemed to have been captured and kept by the exorcist. A usual reaction to the presence of a ghost should be scary. But Das’ character transcends such an image. Her portrayal exudes warmth and affection – quite unimaginable emotions that can be associated with a ghost. That is what makes the ghost memorable. She does not age. She remains a Darling, indeed just like Das is to his devotees!