Letters to Jorina – A Novel by Ganeswar Mishra.Translated from Odia by Himansu S. Mohaptara and Paul St-Pierre.Authorspress, January 2021. Pp. 72. Rs. 250. 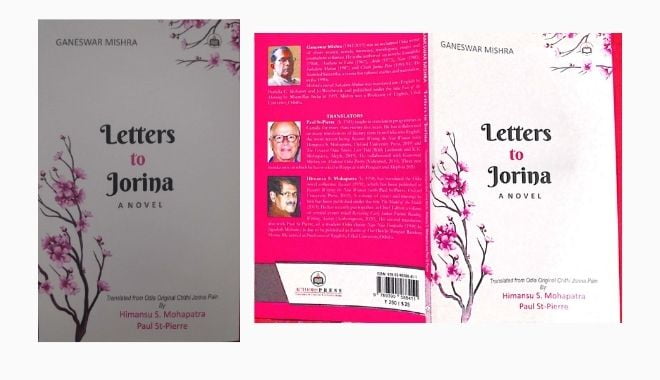 Though a prolific writer, the fictional output of Ganeswar Mishra (1942-2015) is not large. Up until a short time before his death, he was known to have written five novels: Samudrika (The Mariners), Andhara ra Luha (Tears of Darkness), Arohi (The Rider), Neta (The Statesman) and Sakala ra Muhan (Face of the Morning). Based on these works, Mishra’s reputation in Odia literature is that of a sensitive chronicler of small-town life with deep roots in a communal mode of living sanctioned by tradition and religion. Sakala ra Muhan further reinforces that reputation with its authentic evocation of a world filtered through a child’s sensibility. It is translated into English as Face of the Morning.

The discovery of a sixth novel by Mishra shortly before his death is an invitation to us to enlarge our picture of the author. For in this novel, which is entitled Chithi Jorina Pain, the author presents himself as a cosmopolitan, a citizen of the world without repudiating his local roots. He does it through the creation of an exemplary crossover figure named Alok Das.

Alok is an Odia with intimate ties with his traditional town of Jahanpur (read Puri) with its temple and close-knit community. He has been to England, and has shown an extraordinary elasticity in cultural adaptation. He does of course remain conflicted about where he truly belongs, yearning for Odisha in England and dreaming about England when he is back in Odisha. Being caught between cultures is his curse, but it is also his blessing. It imbues him with a cosmopolitan consciousness which rises above allegiance to any one language or any one type of existence, and, which makes him recognise the fundamental oneness of humans beneath surface différences of tongue, dress, food, dwelling.

Told informally through eleven letters that Alok writes to his lady friend in England, Jorina McCarthy, the novel charmingly outlines the prospects and problems of our postcolonial condition.

Chithi Jorina Pain is translated into English by Himansu S. Mohapatra and Paul St-Pierre.  Published in January 2021 by Authors Press, Delhi as Letters to Jorina, the book has a foreword by the eminent Odia writer Jagannath Prasad Das.

“All the pleasure of use of familiar letters is to give us the assurance of a friend’s welfare”.

These words are by Alexander Pope (1688-1744), considered to be the world’s first “Letter Writer” in English, treading in the footsteps of the ancients, Cicero and Seneca.

Alok Das’s letters to his lady friend overseas, that make up the slender volume Chithi Jorina Pain by Ganeswar Mishra, builds on this base but also goes beyond it, in an engaging cultural exchange. Originally written in the 1990s, the collection was previously unpublished in book form.

The translation in this epistolary novel vividly captures the delicate nuances of the author’s reflections on a six-year sojourn in England, by his main character, Alok Das. After he returns to Odisha, Alok decides to write to a friend, Jorina McCarthy. We travel back and forth in time, through scenic drives to the countryside, listen to comments on the wet British weather, and discover Alok’s friends, especially Jorina and her husband Ben. We also notice Alok’s very correct manner in adding his good wishes to her husband in every letter he writes, that often praise his talent at photography. Alok also mentions his wife and children during their correspondence. There exists an undefined boundary that Alok does not wish to transcend, living in a tradition-bound society, in order to nurture and maintain a cherished epistolary friendship. Hark! The author cautions us in the Preface, “Is it ever easy to draw a clear line between the real and the imagined?”

Alok’s letters reveal the camaraderie, though one-sided, and their cross-cultural journeys, with subtle comparisons. The author’s style of persuasion is gentle, so that the comparisons are not offensive. Truth be told, Jorina, is of Guyanese origin, living in her ‘adopted’ country and may react differently from an English woman. Alok reflects on their journeys to Spain at different times and the letters continue to present the warmth of their friendship.

In Letter 2, the author says “We in India don’t believe in changing houses…” Indeed, as has been pointed out in the Afterword, even if we do move, we remain deeply attached to our first homes, our roots. In L3, in my view, there is a bit of fiction – as I doubt a British Civil Servant is permitted to teach English to students at a school. Spouses may perhaps be permitted to do so. This holds in our Ministry of External Affairs too!

One cannot miss Alok’s satirical references to colonial and post-colonial issues that surface for Indians, whether they are at home or abroad, and especially, when they are of the globe-trotting variety like Mr. Sharma in Letter 4! Temples and religious traditions are depicted with sensitivity so as to elicit understanding of Indian culture. Issues on loneliness and isolation, on aging are well delineated.  Observations on respect for elders in India, regardless of rich or poor, are to an extent true, though we do hear of callous second/third generation examples of desertion and duped inheritance. Some of us may relate to the concept of the Global Citizen, as children have spread their wings to study and work across continents.

The Afterword by Mohapatra is enriching, with its scholarly postcolonial framing of the cultural exchange. He aptly calls this implicit ‘exchange’ of letters — as Alok refers to a letter or news received — “a fine example of cross-cultural negotiation”. Due attention is paid to our first ‘modern’ short story writer in Odia from over a century ago, Fakir Mohan Senapati. Mohapatra’s words add aspects to the translation. The author’s depiction of Odia culture and society is evocative and endearing, and, will entice the attention of the international reader and the Global Citizen.

Celebrating Kamala Harris As VP: Is Your Name Kamala? Here’s What You Can Win