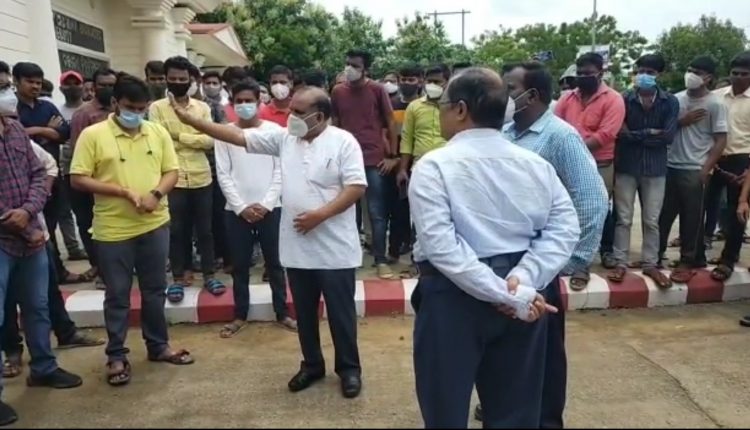 Baripada: The students of Sriram Chandra Bhanjadeo University at Baripada in Odisha’s Mayurbhanj district on Tuesday staged a demonstration demanding online examination after several inmates of a hostel tested positive for COVID.

Following symptoms of COVID, the university authorities carried out test of the inmates of the women’s hostel in the campus two days back. Out of 100 hostel boarders tested, 20 confirmed positive for the disease.

The agitating students alleged that the university authorities stopped the testing midway. As some hostel boarders have symptoms, more students might have been infected, they added.

“The superintendents of different hostels have not taken any step for treatment of the infected students nor provided medicines. The students have been told to avail treatment on their own. It is disappointing that at a time when the state government is giving top priority to health issues of the people, the university has remained complacent to COVID,” said Subhajit Pani, a students’ leader.

Subhajit, who led the students in locking up the university’s main gate and staging demonstration, said they wanted the university officials and hostel superintendents to take care of the COVID infected students.

Demanding cancellation of the offline examination, which has started since Monday, the agitating students demanded the university to conduct it online.

The vice-chancellor and officials of the university tried to pacify the students and told them to withdraw the agitation. But the students stuck to their demands.

Speaking to the media persons, vice-chancellor Prof Kishore Kumar Basha said they had requested the students to open the university gate as it was affecting the students who had come to appear at the examination.

“After the students submitted a representation on COVID infection on Monday, a meeting of PG Council was held. We referred the matter to the government. But the government to follow its guidelines on offline examination,” he said.