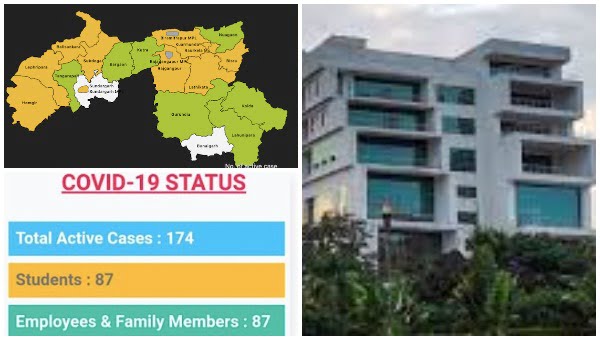 Rourkela: The COVID tally on National Institute of Technology (NIT)-Rourkela campus in Odisha’s Sundargarh district has touched 174 with 87 students and as many employees and family members testing positive for the virus.

Following a spike in cases, the Rourkela Municipal Corporation had conducted two-day rapid antigen on the campus during which 500 samples were tested, sources said.

Although the Odisha government on Friday ordered the closure of colleges, universities and technical institutions in the state from January 10 in the face of spiralling COVID-19 cases, no such decision has been taken yet at NIT-Rourkela.

Students of first, second and third years are not present on the campus at present.

Speaking to Odisha Bytes, Registrar Dr Pradip K Das said that students had come to the campus with parental undertakings before cases started rising. “They can leave the campus if they want but they have to go at their own risk. We are taking sufficient precautions and monitoring the situation. We are conducting COVID tests on the campus. There are near about 250 ongoing projects. To avoid crowding, we are allowing 50 per cent students inside labs. Faculty members are also coming shift-wise. We may change our decision in future,” he added.

Notably, Sundargarh has been reporting the second-highest COVID cases in the state since January 5. The number spiralled to 869 on Monday from 662 the previous day.

Sundargarh now has 3060 active cases while the test positive rate of 10.6 per cent has pushed it to the Red zone.