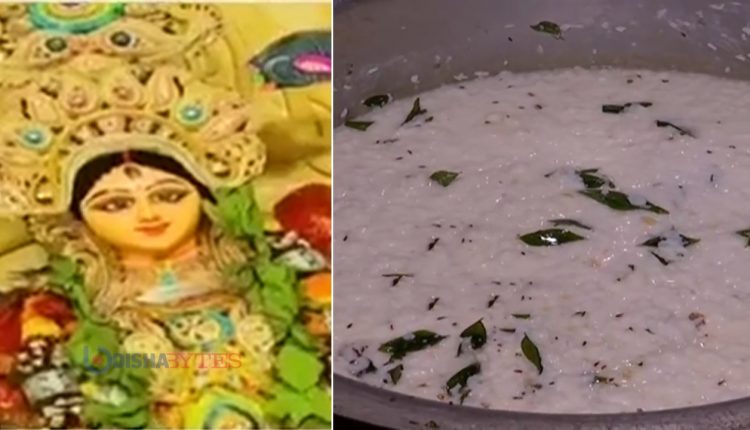 Bhubaneswar: As the five-day Durga Puja festival draws to a close in Odisha, the unique tradition of offering ‘dahi pakhala’ to the Goddess on Vijaya Dashami attracted a large number of devotees to different pandals on Wednesday.

While fruits, ladoos and other offerings are made to Maa Durga as ‘bhog’ till Navami, special delicacies like ‘dahi pakhala ‘ – water rice with curd – and a dish prepared from green vegetables are offered to the Goddess at different puja venues, particularly in Bhubaneswar and Cuttack, on the concluding day as per an age-old tradition.

“This is a unique tradition. We have been offering ‘dahi pakhala’ to the Goddess as bhog before the Bhasani ceremony when devotees bid her adieu. While Devi Durga is very fond of this special delicacy, many devotees also throng our pandal to relish the prasad,” said organisers at a puja pandal in Bhubaneswar.

‘Dahi pakhala’ is not merely a mix of curd, water and rice. Ginger slices, jeera (cumin) powder, lemon juice,  pieces of curry leaves and coriander leaves along with several other ingredients also spice up the dish to make it a gourmet’s delight, said a cook at another puja pandal in the state capital.

“Dahi pakhala is a major attraction for devotees. It is served to the visitors as prasad after being offered to the Goddess,” Assistant Secretary of Chauliaganj puja committee in Cuttack, Lingaraj Bastia, said.

Irrespective of caste, creed and religion, devotees belonging to all sections of the society visit the puja pandal to have ‘dahi pakhala’ which is offered along with another dish of mixed vegetables, he said.

This year, bhog has been prepared for over 10,000 people and more than 3,000 devotees have already been served the Prasad, he said, adding that over Rs 6 lakh has been spent by the committee for the purpose this time, while devotees provided many ingredients like rice and vegetables.

The practice of offering ‘dahi pakhala’ started decades ago. More than 10 quintal rice and around 20 quintals of different vegetables have been used in the making of the special delicacy for the Goddess, said a cook at the pandal.

“Nothing can be tastier than ‘dahi pakhala’, a favourite delicacy of Odia households. Dasami is the time to bid adieu to Devi Durga and ‘dahi pakhala’ is considered to be the best Odia farewell treat for her,” said a devotee at a pandal.