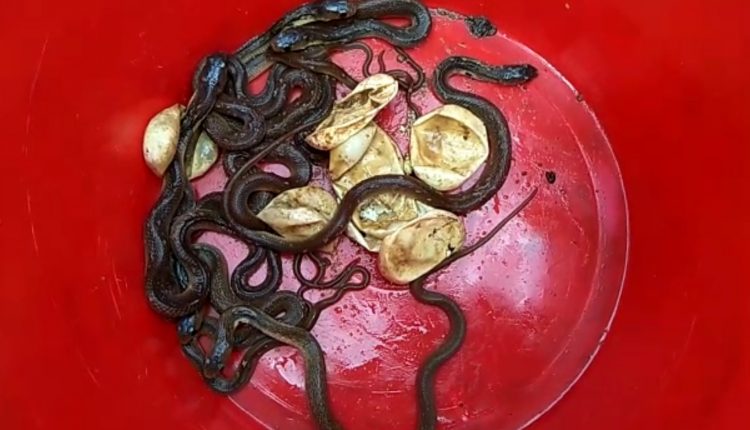 Bhubaneswar: A mother cobra was found dead while its babies were rescued alive from an unused septic tank in Odisha’s Cuttack district on Tuesday.

According to Snake Helpline, Laxmidhar Parida of Dolanapur village in Banki area of Cuttack district informed it about the cobra and its babies. He said while he had gone inside the new septic tank to clean it, he found a large snake dead and some baby snakes crawling around.

Two members of Snake Helpline, Lalit Mohan Panda and Durga Madhab Mohapatra, went to the spot. After entering the tank, they found a Common Indian Cobra dead and some live babies. They rescued 14 cobra babies and body of a 4 ft long cobra along with 8 empty egg shells. Few other eggs shells were damaged due to presence of more water inside the tank.

They said the pregnant cobra might have fallen into the tank and laid eggs there some time back. Though the eggs hatched after the incubation period of 60 days, the mother cobra died of starvation finding no prey inside the tank.

“The babies would have died without food like their mother, had we not rescued them. They have surely not taken any food since they hatched from the eggs,” said Panda. Later, the cobra babies were released in a suitable natural habitat.

Subhendu Mallik, general secretary of Snake Helpline said, “This is a very interesting case. Common cobras have proven cannibalism records and larger cobras don’t hesitate to prey on smaller ones. The mother cobra had every scope to eat its babies for her own survival. But, it opted to die. It should be an interesting case for herpetology.”

Normally, cobras stay with the eggs for the full incubation period to protect those from predators like birds, rodents, snakes, lizards etc. But, by instinct it leaves the eggs 1-2 days before hatching. Because the mother remains hungry for about 60 days and can easily prey on her own babies.

The cobra babies come out of the eggs and learn hunting on their own. If a baby cobra is successful in hunting preys, it will survive, otherwise it will die. No maternal feeding care is available for baby snakes, said Mallik.

It’s Time To Make Our Choice Of The Greatest ‘ism,’ Humanism