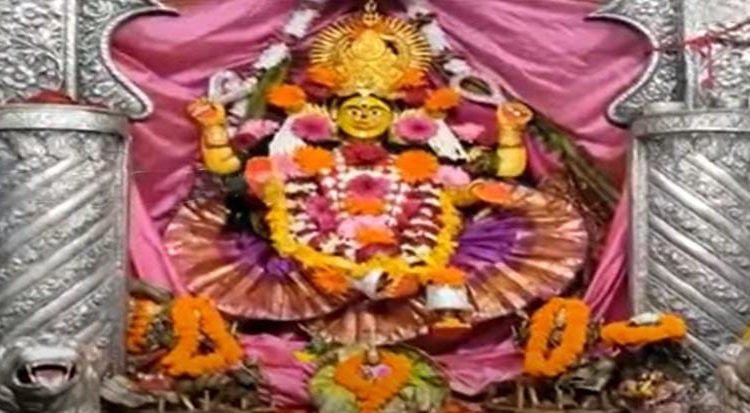 Cuttack: Devi shrines in Odisha’s Cuttack city are agog with religious activities with the beginning of ‘Soda Puja’ (16 types of puja) till Dussehra.

As per tradition, Devi appears in 16 ‘besha’ (incarnations) on different days till the culmination in Durga or Kali incarnation of the Goddess. The deities in the shrines adorn different attires as per the incarnation on these days. Besides the clothes, jewellery including the crown and particularly the face of the deity keep changing as per the ‘besha’ on the particular day.

The devotees thronged Chandi temple and Gadachandi temple in the Silver City with the beginning of ‘Soda Puja’. On the first day, the Goddess appeared in ‘Suna besha’ (golden attire).

On Tuesday, Devi in Gadachandi temple adorned ‘Kamala besha’. On the puja offered to the Goddess on the day, the main priest of the temple said, “The rituals started from early morning with ‘Sury puja’, followed by ‘Suryanarayan puja’ and ‘Go puja’. Finally, ‘Sodasa Upachar puja’ will be performed and the day’s activities will culminate in ‘arati’ of the deity.”

In fact, ‘Sodasa Upachar puja’ hold significance for the devotees. It is believed that if anybody has darshan of Devi in this incarnation and wishes anything, it is fulfilled. Due to this belief, the shrine is thronged by large number of devotees on the day, said the priest.

Similarly, Devi in Chandi temple appeared in ‘Bhubaneswari besha’ on the day. The temple has been decorated with flowers, festoons and colourful papers on the occasion. Hundreds of devotees from Cuttack turned up at the temple to offer puja as Chandi is considered as the presiding deity of the city.

Due to 2-year ban on public participation in celebration of Dussehra including the temples, a large number of devotees are expected to visit the temples. The management of the temples and city administration have made elaborate arrangements for smooth darshan of Devi by the devotees on all 16 days till Dussehra.