Did A Human Jam On Mt. Everest Lead To Kalpana’s Death? Find Out 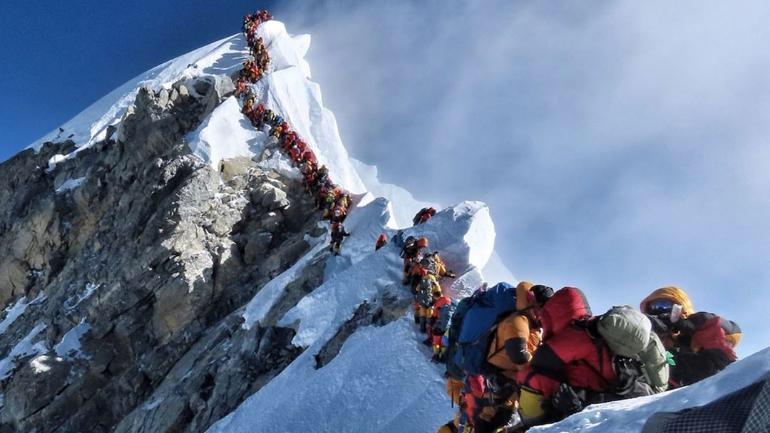 Bhubaneswar: Lack of oxygen and extreme exhaustion while waiting in the queue on Mt. Everest could have led to the death of mountaineers this season, believe experts. The Everest death toll has risen to 10, including three Indian climbers.

Odisha’s first woman mountaineer, Kalpana Dash, died on May 23 while descending, after scaling Everest for the second time. She scaled the peak for the first time from Nepal in 2008.

“Hundreds of climbers attempt to climb Mount Everest and other Himalayan peaks during the spring climbing season. Although one can never infer the reason for death at such high altitudes, this time, since so many casualties have happened continuously, the reasons can be gauged,” said Odisha’s ace mountaineer, Jogabyasa Bhoi.

He said that ‘lack of oxygen’ and ‘muscle collapse’ could be the major reasons for the deaths. As overcrowding congested the route from Camp IV to the top, climbers had to wait for their turn to reach the peak.

“When you are constantly on the move, the body stays warm and there is less chance of frostbite. But when you are simply waiting, you consume more oxygen and the body collapses,” pointed out Bhoi.

Mountaineers feel that this has become a lucrative business in Nepal for many.

Expeditions have become more popular and the number of permits given to climb Everest has increased.

According to estimates, nearly 5,000 climbers have scaled the peak since the pioneering ascent, many multiple times.

A report in BBC News said a lot of people push themselves to the summit, but once they reach it, “they lose their motivation and energy on the way down”.

Supplementing the report, climber Ganesh Jena, said, “Their morale decreases a lot especially when they realise it’s a long, crowded journey. Many accidents happen during the descent because people are just not concentrating enough anymore.”

Senior sports journalist Sambit Mohapatra said, “Age was never an issue with Kalpana because if you see the trend, a number of younger people have also passed away. It was possibly due to lack of oxygen. Since it took so long for everyone to descend due to the big crowd, running out of oxygen is highly possible,” noted Mohapatra.

Congestion on the mountain has become so bad that climbers are dying on the descent, according to a report in The Washington Post.

Noted cardiologist Dr. Brajaraj Das said, “Cardiac arrest is a very common phenomenon on such high altitudes and this could happen to anybody due to lack of oxygen.”

Trash From Mt Everest To Be Converted Into Art Form; Know…