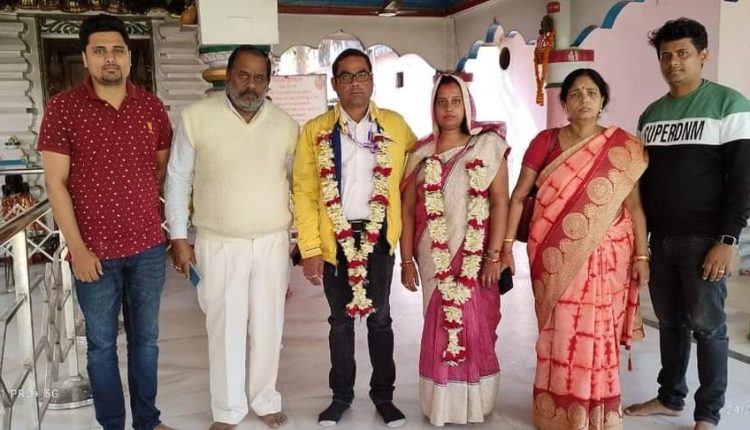 Bhubaneswar: In a unique gesture, former Odisha MLA Nabin Nanda solemnised the marriage of his daughter-in-law following the untimely death of his elder son around two years ago.

The marriage of Madhusmita (Seema) was held in a simple ceremony at a temple in Nayapalli area of Bhubaneswar on the occasion of the National Girl Child Day on Tuesday, sources said.

“This is a special and memorable day for me. I don’t know if I am doing the right thing. However, I got my daughter-in-law married in a deviation from Hindu rituals and traditions,” said an emotional Nanda after the second wedding of Madhusmita, whom he treated like his own daughter.

The marriage was held after obtaining the consent of Madhusmita’s father, Nilamani Panda. The ex-legislator gave the much needed support and affection to her after the death of  his son Sambit (Somu).

She got married to Shivchandan, the only son of Kishore Chandra Pati of Remuna in Balasore district. Apart from Nanda and his wife Ranjita, two brothers of Madhusmita – Soumyua Ranjan and Rashmi Ranjan – were present during the wedding ceremony.

Nabin Nanda, who began his political career from the panchayat level, happens to be a two-time MLA – from Gondia and Dhenkanal. He had joined Congress before the last general elections in the state in 2019 after being expelled from the ruling BJD. He resigned from Congress last year.

Nanda’s son Sambit, who was a social worker, died in 2021 at the age of 38 while undergoing treatment for infection of the lungs.