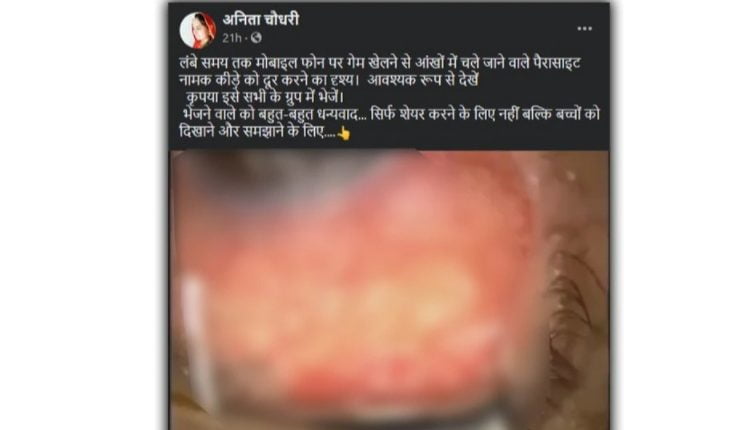 New Delhi: A video showing an eye operation where a worm is being extracted from a person’s eye is doing the rounds on social media. The video can lead to panic, as it claims that excessive use of smartphone has led to such a state of affairs.

“These visuals show the removal of a parasite from the eye of a person who used to play games for long duration on his smartphone,” reads the caption with the video.

The viral video is actually that of a Kerala-based patient who got infested with Loa Loa worm in 2013. Experts stated that happens because of certain types of flies, and not smartphones. The audio in the doctored video is mute.

The video being circulated was originally posted on Dr Ashley Mulamoottil’s Facebook page on April 18, 2013. The doctor explained that the patient had come with a complaint of severe eye pain. On close examination, he found an 8-inch long Loa Loa worm inside the eye.

This is endemic in western Africa and comes from a certain kind of fly called deerfly, that tears human skin and licks blood. In doing so, the fly transfers larvae of the worms to the blood. The worms grow inside mainly the eye, but can also be found in the brain, heart, lungs or skin.

According to the US Centre of Disease Control & Prevention, this worm infestation is present in 10 countries around west and central Africa with 40 per cent of 15 million people at risk.

To protect oneself from this worm, one has to keep surroundings clean.