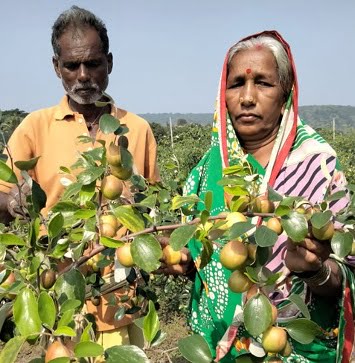 Berhampur: A farmer of Ganjam district is set to get the sweet taste of success after diversifying to farming of Kashmir apples.

The farmer, B Ranjan Pradhan of R Bahadapalli near Rambha, used to cultivate traditional crops like paddy and some seasonal vegetables in his farm land. But the yield was not enough to ensure a comfortable lifestyle for his family which includes his brother Rabi Pradhan, mother Sashi Pradhan and others.

This prompted Ranjan to start something new, even if it meant taking a risk. After consulting the agriculture experts of the area, he decided to start farming of red Kashmir apple Ber.

Ranjan planted about 600 saplings of the Ber variety in 2 acre of his land in January last after procuring those from Thailand at a cost of around Rs 2 lakh. Though the investment was huge considering his income sources, Ranjan wanted to take the risk.

Now almost all the saplings have made a healthy growth and he expects to start harvesting Kashmir apples from coming January. One tree having a life span of 10 years is expected to yield maximum 10 kg of apples in a year.

Ranjan will go for the first year’s harvest between January and March when the apples will be ready for consumption. His family has already contacted the local apple traders for sale of their produce.

On an average, apple of normal variety is sold in the local market at Rs 120 per kg. Ranjan expects that the demand for the red Kashmir apple Ber would be more compared to other apples.