Goya’s Wellington: The Curious Lost-&-Found Case Of The Stolen Portrait 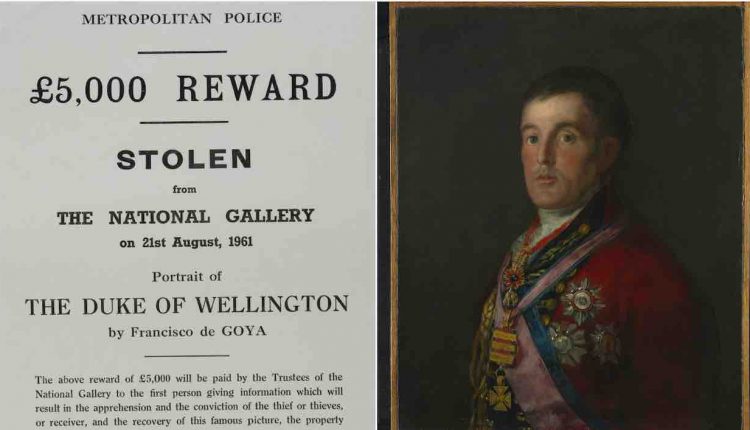 August 21 marks the anniversary of two legendary thefts of Art. In 1911 on this day, Leonardo Da Vinci’s Monalisa was stolen from Louvre in Paris. Exactly fifty years later in 1961, Goya’s famous Duke of Wellington was found missing from National Gallery, London. There are some coincidental similarities in both the cases, besides the date. The thefts were the first ever of these two galleries and hence created a huge sensation and news. In both cases, the stolen portraits were voluntarily returned by the culprits after a few years. The outcome of the trial in both cases was enthralling and insightful.

A few days ago, I saw the movie ‘The Duke’, which is based on the true story. The movie drove me to dive deep into the story. I am presenting Goya’s case today.

On June 14, 1961, a New York art dealer Charles Wrightsman bought Goya’s portrait of the Duke of Wellington at Sotheby’s for £140,000. The purchase prompted widespread public disapproval that such an important historical painting was to be allowed to leave the country. In view of widespread opposition to his purchase, Mr Wrightsman generously offered to sell the picture to the National Gallery for the auction price. National Gallery purchased the painting at £140,000 from the American dealer and the portrait found its place for display in National Gallery on August 2, 1961. Nineteen days later on August 21, surprisingly and mysteriously the  painting was found missing from the Gallery. The theft came as a huge shock to the authorities as it happened in spite of elaborate security and round the clock surveillance by guards in the night. The sensational theft created huge news and hit the national headlines. There was unprecedented publicity and outcry. It became a topic of discussion, speculation and conjectures in public as well as in media.  Stories started surfacing in media pointing out the theft could be handiwork of an international gang. An Italian dealer was suspected. It was widely talked about that this was a well-orchestrated heist by a criminal gang. Newspapers were flooded with collection of conjectures and myriad speculations. Scotland Yard began its serious investigation with possible leads and assumptions. They came out with mapped profiles of the assumed culprits.

Years passed, there was no progress, no breakthrough. Police announced a reward of £5000 and gave wide publicity to it for recovering the painting. Neither the police nor the public could get any clue. Fervent appeals made for returning the paintings were not responded.  Scotland Yard’s raids of   potential hideouts left them empty handed. With every piece of news published, more spectators visited the Gallery to see the empty place where the portrait was installed. Visitors to the gallery increased. The empty space without its occupant became an object of public attraction leading to surge of visitors causing increasing embarrassment to Gallery officials and police authorities.

On August 31, 1961, the news agency Reuters received a letter postmarked (London SW1), which stated, “The act is an attempt to pick the pockets of those who love art more than charity……The picture is not, will not be for sale…It is for a ransom of £140,000 to be given to charity. If a fund is started ..it should be quickly made up and on the promise of a free pardon for the culprits. The picture will be handed back.” This letter baffled everyone. It was dismissed as a prank.

Little more than a year later, on July 4, 1962, another letter post marked”Lancaster,Morecambe” was received by Exchange Telegraph New Agency. It mentioned, “The Duke is safe. His temperature cared for. His future uncertain…we want pardon or right to leave the country- banishment? We ask that some non-conformist type of person started the fund for £140,000.” The anonymous letter added to anxiety, apprehension and tension without any clue.

Again, on December 31, 1963, a letter was posted in London NW1 which indicated that the writer was still demanding charitable donation of £140,000 for returning the painting. The desire to avoid prosecution for his action was uppermost. This too failed to break the ice or get any lead.

On March 16, 1965, the writer posted a note in Darlington: “Goya’s wellington is safe. I have looked upon the affair as an adventurous prank- must the authority refuse to see this way. I know now that I am in the wrong, but I have gone too far to retreat. He proposed to return the painting if it was agreed that it would be exhibited privately for one month and all the viewing fees (he suggested 5 shillings a ticket) should be paid to charity and the thief not to be pursued.” This too did not work.

On May 25, 1965, the Daily Mirror received a letter containing a left luggage ticket for New Street Station in Birmingham. Daily Mirror immediately informed Police, which rushed to the station, found the left luggage matching the luggage ticket no and recovered the painting without the frame. The painting was handed over to the National Gallery, which on examination confirmed that it was the same painting which was stolen. This unexpected appearance of the painting after 4 years heightened the unexplained mystery surrounding the sensational theft.

The Gallery and the Government had a sigh of relief. The Police failed to catch the culprit. Speculation about the identity of the culprit continued with greater imagination and ingenuity than before.

On July 19 , 1965, the culprit walked to the Scotland Yard office and surrendered before the police, confessed having stolen the portrait. The police did not believe him as he did not conform Police’s perception of the culprit. Police, from his appearance and background, did not take his confession seriously. He was one Kempton Bunton. When interrogated, Kempton Bunton was found to be a former lorry driver, now without job at the age of 61, a resident of Newcastle-upon -Tyne. He told police that he had thrown the frame into river Themes. Police investigated the case thoroughly and framed five charges against him before the Court.  He was charged for theft of the painting; theft of the frame; for demanding money with menaces from Lord Robbins, Chairman of National Gallery Board; demanding money with menaces from the Editor of Daily Mirror, and for causing nuisance to the public by unlawful removal and wrongful detaining the painting on display at the National Gallery.

He told the Court, “I had no intention of keeping the painting or depriving the Nation permanently of it. As to the frame I believe it was gold coloured and I left it on August 21 or 22 in 1961 in a cupboard under the stairs in a house where I lodged which was within three miles of King’s Cross. It is not true that I threw the frame into the Themes. I said this because I did not want to get the landlady into trouble…My sole object in all this was to set up a charity to pay the television licenses for old and poor people who seem to be neglected in our affluent society.”

There is a background to his charity. He himself was in jail three times for a total of 69 days for not having a licence for his TV to view BBC programmes. Every time the inspector visited his house to check the licence he protested and took a stand his TV did not have a BBC connection. He also campaigned that Government should provide TV licence free to old-aged pensioners. Although his TV had ITV without access to BBC, he was jailed thrice for refusing to pay for a TV licence every time.

Bunton’s trial began in November 1965. He was represented by Jeremy Hutchinson who made a name for successful defence of Lady Chatterley’s Lover in 1960. His counsel argued that Bunton did not steal the painting. He referred to Section 2 of the Larceny Act 1916  which stated that a person steals who:

(a) Without the consent of the owner;

(b) Fraudulently and without a claim of right made in good faith;

(c) Takes and carries away;

(d) Anything capable of being stolen;

(e) With intent at the time of such taking permanently to deprive the owner thereof.

Stealing was only a crime, counsel argued, if, at the time of taking, the person intended to deprive the owner of his property for good. The evidence was clear that Bunton had throughout intended to return the portrait to the National Gallery once a donation to charity had been made. With regard to the frame counsel considered that common sense dictated that when the picture was taken this principle also related to the frame. The whole incident was, he argued, honest to goodness skulduggery, but there was no evil intent.

The court after hearing exhaustive arguments acquitted him of four charges but confirmed the charge of theft of frame for which he was sentenced to three months in prison.

Bunton’s case exposed deficiencies in the criminal law of England and Wales that had never been addressed by the Parliament. Consequently, the Goya case became the driving force for the creation of an entirely new criminal offence; namely, the removal of articles from places open to the public. An important clause was added to Theft Act 1968 making it illegal to “remove without authority any object displayed or kept for display to public in a building to which public has access”

In 1969 after his death, Bunton’s son, as a measure of redemption from guilt, admitted that he had actually stolen the painting and not his father(which is true). Police did not take heed of this and dismissed the claim in ‘public interest’.

Bunton’s unsuccessful campaign for free television licence for the aged had a silver lining after 34 years. In 1999, British Government made licence free for those above 75  years of age.

The Duke is a story of one man, an ordinary man, who stole a national treasure and then the nation’s hearts.