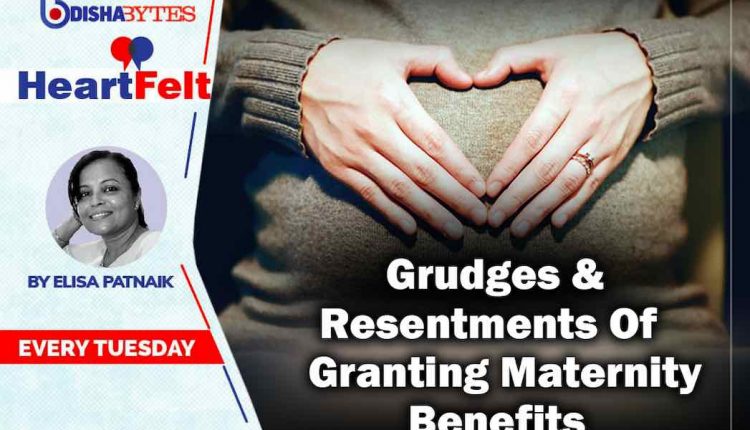 I am yet to see a working female friend, colleague or family member truly experiencing her maternity benefits without facing any grudge, resentment, discrimination and harassment from her supervisors, peers and colleagues. Or being welcomed back with open arms, duly acknowledged for her work and treated fairly without any discrimination.

An acquaintance working in a top corporate organisation, who had applied for maternity leave was thoroughly dissuaded to join work after her leave ended. “I got repeated calls from my boss asking me to rethink my decision to join work. My boss and other supervisors seemed unhappy and even peeved seeing me at work post my maternity leave. I was constantly told by my boss to put up my papers as it would be quite difficult for me to adjust to the rigorous work schedule,” she says. “I assured them that there would no change in my competency level and that she had no reason to worry.”

However, the lady had to go through a hard time as she was constantly given additional responsibilities, asked to stay late and also travel long distances knowing fully well that she had a small child at home. “It became so difficult and stressful for me that I was compelled to resign from my position,” she says.

In another instance, when a friend informed her manager and colleagues about her pregnancy and impending maternity leave so that she could plan in advance, she was met with not just resentment but also hostility. Coincidentally, this was soon after the annual appraisal and promotion process in the organisation where my friend had been given a good raise and a promotion. One of her supervisors grumbled that if they had been aware of the pregnancy and the maternity leave they would not have given her the promotion as now she would not be available for nearly six months.

In fact, I have seen several senior managers, both men and women, who claim to promote gender-friendly policies and environment in their workplaces against granting full maternity benefits to their women supervisees.

When women join workplaces after their maternity leaves, they are treated as if they have come back from a long and enjoyable vacation at the office’s expense! Worse, some even claim that pregnant women in their workplace ‘take advantage’ of their pregnancy as if enjoying a privilege and not an entitlement.

Sometimes, new mothers are even dismissed on some pretext or the other. They are made to feel so redundant or incompetent that they are forced to leave their jobs. Many are treated poorly and often experience harassment or negative comments from their colleagues and bosses for availing maternity benefits or flexible working conditions. In addition, expectant or new mothers often face discrimination in the workplace – promotions are denied, training withheld and their participation curtailed in important professional decision-making processes.

And for those still experiencing post-natal complications or having babies with health problems, it’s even tougher as they are often discouraged from attending medical appointments, attending to their children or working from home.

There have also been instances where women employees have been terminated because of their pregnancy on grounds of‘ ‘performance deficiency’ or ‘unfit to join service.’ The Act now makes it illegal to fire a woman on account of pregnancy.

It is ludicrous the various ways in which a woman employee’s pregnancy or the prospect of pregnancy and motherhood is interpreted and treated by the employers. In fact, some employers even think it is reasonable to ask women about their plans to have children in the future during recruitment. There have also been controversies about whether a woman should disclose whether she is pregnant during the recruitment process and whether it is also reasonable to ask women if they have young children. Some employers even believe that women should work for an organisation for at least a year before deciding to have children.

There is also the perception that women who become pregnant and new mothers at work are generally less interested in their careers and work as compared to their colleagues in the organisation. “I was made to feel like I was no longer an asset to my organisation, but a liability when I joined work after my maternity leave. Even my commitment to work was questioned upon announcing my pregnancy and on return to work,” says my niece. Some women returning to work also find that their salary has been either reduced or their pay increments and bonus have been curtailed. They also miss out on promotions and opportunities for career advancement and leadership development.

One of the major reasons for women dropping out of work is pregnancy and motherhood, the accompanying physical changes and challenges and the primary responsibility of caring for their newborn children. Especially with the rise in nuclear families and declining family and social support for new parents. Consequently, many women are either forced to give up their jobs, compromise on their careers or have a tough time managing both their job and nurturing responsibilities.

India made several progressive amendments to the Maternity Benefits Act in 2017 and increased the maternity leave for women from 12 weeks to 26 weeks. The Act also included provisions for working from home for nursing mothers even beyond the 26-week maternity leave period, as well as setting up of crèches with nursing breaks for women with small children.

Unfortunately, however, it’s only women employees and workers employed in the formal sector, who have access to maternity benefits. Millions of other women working in informal and unorganised sectors still remain invisible and unprotected by labour laws and fair working conditions.

The objective of the amendment was that by ensuring these entitlements more women will be retained in the workforce and will be enabled to progress in their career. But for women working in the formal private and public sectors who have the right to paid leave during and after pregnancy, it has never been easy.

Besides the negative attitude, harassment and discrimination in the workplace, one of the primary reasons for small and mid-level organisations resenting maternity benefits are because of the ‘unnecessary’ cost burden that employers have to bear. Some employers even today see maternity benefits as extra expenses for the organisations as the Act places the onus of the enhanced maternity leave, along with the cost of crèches on the employer.

So, if there is a choice of a prospective employer between male and female candidates with similar experience, educational qualifications and background, while the cost of hiring a male candidate is largely limited to salary and other benefits, for women the incremental cost to the company would also include the maternity benefits. And a liable consequence of this would mean a reduction in employment opportunities for women.

But on a fundamental note, why should the responsibility of child-care lie solely on women? By providing maternity benefits only to women, the law effectively places the responsibility of bringing up children solely on women. The crèche could be very well located in the vicinity of the father’s workplace where the father could also check on his child. Men are not compensated for sharing their parenthood responsibility as the concept of fatherhood or parenthood still seems to be an alien concept.

Although India now offers one of the longest maternity leaves, there is no paternity or shared parental leave (availed by either parent). Also, unlike some other countries, the cost of providing maternity benefits in India is entirely on the employer. In other countries with extensive childcare benefits, the government shares some part of the financial costs.

Women will continue to become mothers, do their jobs quite well and progress in their careers. But it’s time we make the transition easy for new and returning mothers, create a conducive and welcoming workplace and adopt a long-term view on diversity and inclusion which together can go a long way in retaining and nurturing the female workforce.

Working women and mothers are not mutually exclusive and not independent of each other. We expect women to work like they don’t have children and raise children as if they don’t work. Time to discard this folks!

FIFA U-17 Women’s World Cup: India Lose 0-8 To USA In Opener At Kalinga Stadium In Bhubaneswar