Have You Seen Odisha’s State Bird This Dussehra? You Are In Luck 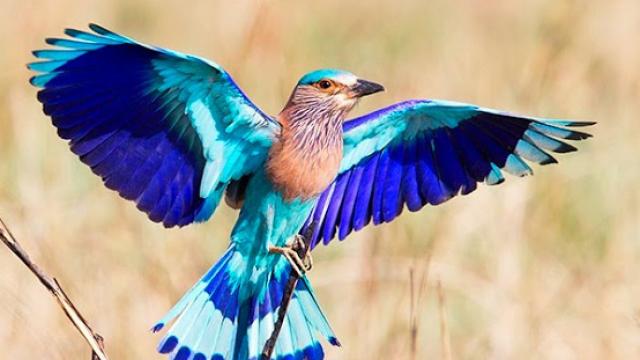 Odisha being an agrarian economy, many of its festivals and cultural practices are to do with farming, such as Nuakhai, Raja and Makar Sankranti. During these festivals, offerings are made to various deities for good yield of crops.

These festivals are also associated with particular time of celebration and unique traditions. One such tradition is getting the privilege to see the Tiha or Neelkanth bird (Indian Roller) on Dussehra. Besides being the state bird of Odisha, Neelkanth is also considered auspicious as it’s associated with Lord Shiva and Lord Rama.

Farmers believe that seeing the bird on Dussehra—the day when good triumphs over evil—changes one’s destiny and ushers in prosperity.

Neelkanth (‘blue throat’) is taken to symbolise Lord Shiva, who drank poison during ‘Sagar Manthan’ that made his throat to become blue. Hence, seeing this bird is considered a good omen, according to Maheswar Mahapatra, a priest.

It’s mentioned in the Ramayana that Lord Rama had spotted a Neelkanth bird when he set out to kill Ravana. Therefore, it’s believed that seeing the bird heralds good triumphing over evil. Moreover, when Lord Rama killed Ravana, he had to bear the curse of killing a Brahmin. In penance, he and brother Laxman prayed to Lord Shiva, who appeared to them in the form of Neelkanth, Mahapatra informed.

For farmers, Tiha or Neelkanth is an integral part of their agricultural practices. This bird works as a natural pest controller by feeding on insects, grasshoppers, earthworms, millipedes, snails, spiders, crickets and moths among others that damage crops. Therefore, this bird is welcomed as a friend by the farmers, more so during this time of the year.

“This is the time when different types of insects attack paddy fields, which are filled by post-monsoon water. The sun is also not so strong at this time and humidity is high. This is ideal for the growth of microorganisms and pests,” said Dilip Sahoo, a farmer.

“These insects attract many birds like Myna, Heron and Tiha. Getting to see these birds in this season is a good sign for us as they are here to save our crops. Tiha relies on insects and their larva to feed itself. Thus this bird keeps the growth of pests under control and helps crops from being damaged,” ,” said another farmer Gajeen.

“Now, farmers use different pest control medicines to save their crops. But it indirectly affects the birds to a great extent because they only feed on insects,” he added.

According to bird experts, Indian Rollers are mainly seen in Odisha. These are not migratory birds and are confined to their local areas with a radius of 10-15 km.

“Due to breathing problem, these birds keep themselves restricted to a very small area. Moreover during summer, they are affected by heat. So it’s not easy to spot them at that time of the year. Post-monsoon is the most favourable time for the birds. Now, they explore different areas in search of food. Birds like the Indian Roller fly towards paddy fields and once they are done, they again change their location,” Balachandran added.