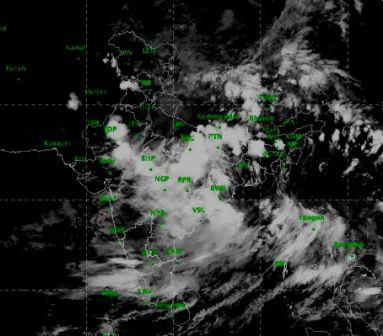 Bhubaneswar: With the India Meteorological Department (IMD) issuing heavy to very heavy rainfall warning for Odisha in the next 12 hours, the state government on Tuesday asked the district collectors to stay on high alert to meet any eventuality.

The IMD in its mid-day bulletin said that the low-pressure area formed over the north Bay of Bengal and adjoining coastal areas of Bangladesh and West Bengal on Monday has intensified into a depression and lay centered over the north-west Bay of Bengal off the north Odisha-West Bengal coasts about 160 km south-east of Balasore and about 130 km south-south-east of Digha. It is very likely to intensify into a deep depression during next 24 hours and move in a west-north-west direction across Odisha and West Bengal coasts during next 48 hours.

In anticipation of a likelihood of flood/water-logging situation in different parts of the districts put under red/ orange/ yellow warning, Special Relief Commissioner (SRC) Bishnupada Sethi has issued a list of advisory to the district collectors, which are as follows.

—Keep the administrative machinery prepared to meet any possible situation that may arise in the event of intense rainfall.
—Areas vulnerable to flood/water-logging to be identified in advance and field officials should remain prepared to evacuate people from vulnerable locations to safe shelters, if required.
—Advance arrangements for providing adequate food, safe drinking water, lighting, health and sanitation facilities at all shelters/relief camps and to provide emergent food assistance to the affected people.
—Preparedness of the Fire Services teams may remain prepared to carry out search and rescue operation.
—Requirement of ODRAF team may be intimated.
—Officials of concerned departments must also remain prepared for immediate restoration works.
—Necessary arrangement to restrict people/vehicles from using the roads/bridges under submergence.
—Other districts are advised closely watch the situation and take appropriate steps, as may be necessary.
—Emergency Operations Centre (EOC) in all the districts to operate round the clock and update the situation to State EOC from time to time.
—Warning to fishermen is to be implemented strictly.

The IMD has issued Red, Orange and Yellow warning for the following districts.

In view of above system, the fishermen have been advised not to venture into the north-west Bay of Bengal along and off the Odisha and West Bengal coasts during the next 48 hours.

Besides, IMD has also advised hoisting of the local cautionary signal no-3 in all the ports in the state.