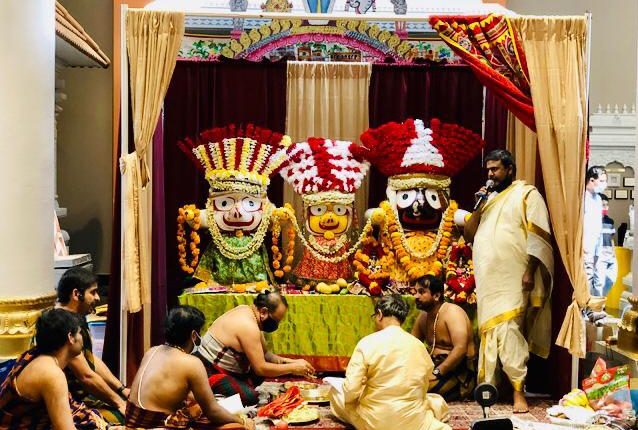 Minneapolis: The biggest Hindu temple in USA hosted Rath Yatra with pomp and splendour in Maple Grove city in the state of Minnesota.

The temple is the abode of Lord Jagannath, his elder brother Lord Balabhadra, sister Devi Subhadra and Lord Sudarshan.

On the day of Rath Yatra, all the religious rituals commenced from the wee hours in a solemn and simple manner under the guidance of Head Priest Murali Bhatter.

Around 11 am, the four deities were taken in a Pahandi procession to the aesthetically built and colourfully decorated chariot. The entire atmosphere reverberated with the recital of hymns, roaring chants of “Hari Bol” and “Jai Jagannath” and the sounding of “hulahuli”. The blowing of conches and the playing of traditional musical instruments such as Ghanta, Kartala, Mardala, Jhanja and Mrudanga added to the religious din.

The highlight of the celebrations was the Pahandi Bije of Devi Subhadra being performed exclusively by the women.

The founder of the temple and Chairman of Hindu Society of Minnesota (HSMN), which is the managing committee of the shrine, Dr Sitakantha Dash conducted the ‘Chhera Pahanra’ (the traditional service of sweeping the chariot).

Earlier, Dr Dash’s wife and poetess Kalpana Dash joined him on the chariot for seeking blessings from the Lord of the Universe.

Around 1,000 devotees also participated in the ceremony and had a darshan of the deities on the chariot.

Then the chariot was pulled to the newly-built Gundicha temple amidst devotional renderings of Kirtan, Bhajans and Jananas. The deities will remain at the temple till Niladri Bije on July 18, 2021.

The special attraction of the celebration was a vibrant cultural programme consisting of Odissi and Sambalpuri dance recitals by the Odia community members in the evening.

Recognition mementos were presented to the projects heads of the HSMN for their commendable performances during the function.

Special mention must be made of HSMN President Pooja Bastodkar for the neatly executed and well managed program.