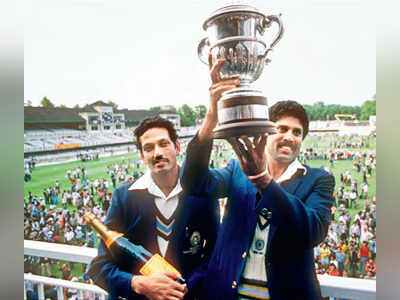 As India squares up against New Zealand in the semifinal of the cricket World Cup at Manchester on Tuesday, after a fine run in the competition despite a suspect middle order, the exploits on this global platform of a bunch of no-hopers 36 years ago come cascading back to rejuvenate cricket enthusiasts.

The 14-member team, led by Kapil Dev, had little or no pretensions of entering the knock-out round of the World Cup held in England and Wales in 1983, leave alone lifting the trophy. India had been doing pretty badly in one day cricket at that time and most followers of the game thought that our cricketers were not good enough for this format.

Prior to the World Cup, the team led by Sunil Gavaskar, had a disastrous tour of Pakistan, with the neighbours led by Imran Khan winning the ODI series 3-1. In the six-test series, Pakistan whipped the Indians 3-0. The selectors then replaced Gavaskar with the young and energetic Kapil Dev to lead the team on a testing tour of West Indies barely three months before the World Cup.

Pitted against Clive Lloyd’s invincible side, India caved in once again, losing the five-test series 0-2. In the ODI series, the West Indians won 2-1. But there was a rare spark. After losing the first one-dayer by 52 runs, India sprang a surprise by defeating the home team by 27 runs in the second ODI played at Albion. The result was huge enough for the entire country to sit up and take notice.

Batting first, India managed to put on a total of 282 for five in 47 overs, which was unthinkable at that time against a pace battery, which included Andy Roberts, Michael Holding, Malcolm Marshall and Winston Davis.

Gavaskar, opening the innings with Ravi Shastri, laid the foundation with a first wicket stand of 93. He himself made 90, while Kapil hit 72. Yashpal Sharma (33), Shastri and Mohinder Amarnath (30 each) contributed as India put up a total of some consequence.

The strong West Indian batting line up was expected to rise to the challenge but medium pacers, Kapil, Balwinder Singh Sandhu and Madan Lal Sharma took two wickets apiece and Shastri snared three scalps with his left arm spin to restrict the home side to 255 for 9 in 47 overs. The great Vivian Richards blasted 64 off 51 balls while stumper Jeff Dujon (53) and Faoud Bacchus (52) contributed down the order. But the failure of captain Lloyd and legendary openers, Gordon Greenidge and Desmond Haynes cost the team dearly.

The win was hailed in India as miraculous. But many cricket pundits are of the opinion that this win truly marked the beginning of India’s rise in limited over cricket.

When the Indian squad for the World Cup was announced, 12 of the team members belonged to the squad, which had toured West Indies. There was new enthusiasm among the members though few gave them any chances of success.

In the World Cup, India found itself in Group-B, a tough pool with West Indies, Australia and Zimbabwe. Only eight teams were participating in the tournament with England, New Zealand, Pakistan and Sri Lanka being clubbed together in Group-A. The teams were to play each other twice (60 overs per innings) in the round-robin format with the two top teams in each pool qualifying for the semifinals.

As a young journalist, still exploring the profession and having done some odd international sports assignments in Kolkata and Cuttack, I was posted at Sambalpur as head of the PTI Bureau at that time. There was no television and my only source of following the matches was All India Radio.

In the opening encounter, India did the unthinkable once again outplaying reigning champions West Indies by 34 runs. India managed to post a total of 262 for eight in 60 overs and then bowled out the Caribbeans for 228 in 54.1 overs. Yashpal Sharma (89) and Sandeep Patil (36) were the principal contributors to the Indian cause while Roger Binny (3/48) and Ravi Shastri (3/26) reduced the West Indies to 157 for nine before a last wicket stand of 71 helped the Windies to reach 228.

India posted their second consecutive victory when they outplayed Zimbabwe by five wickets. Madan Lal, Binny, Shastri, Sandhu and Kapil shared the wickets between them as Zimbabwe were skittled out for 155 in 51.4 overs. A 69-run stand for the third wicket between Amarnath and Patil helped the team reach 157 for five.

Kapil’s team, which would soon come to be known as ‘Kapil’s Devils’, then met their match in Australia. Trevor Chappell, brother of the famous Ian and Greg and known for the infamous underarm bowling incident of 1981, hit a sparkling 110 against India as Australia scored 320 for nine in the allotted 60 overs.

Medium pacer Ken MacLeay (6/39) then ran through the Indian batting as the team folded up for 158 in less than 40 overs.

India stumbled against West Indies next as Lloyd’s team sent them packing by 66 runs. Viv Richards hit 119 to help his team 282 for nine in the allotted overs with Lloyd and Haynes contributing 41 and 38 respectively. India failed to chase the target and was bowled out for 216 despite a valiant 80 by Amarnath. Holding (3/40) and Roberts (2/29) were the pick of the bowlers.

When India travelled to Tunbridge Wells for their second match against Zimbabwe, most had taken it for granted that it would be an easy assignment for Kapil’s team.

I remember listening to the commentary as Gavaskar and Srikanth opened the India innings. But in a tizzy, the Zimbabweans had reduced India to 17 for 5 with Gavaskar, Srikanth, Amarnath, Patil and Yashpal back in the pavilion. The Zimbabwe new ball bowlers, Peter Rawson and Kevin Curran (father of England all rounder Tom Curran) had done all the damage by claiming three wickets each.

Kapil and Binny were together as India’s hopes of progressing further in the Cup appeared to have evaporated as I switched off the radio in disgust. After about an hour, I switched on the set to find out whether the team had been bowled out or not. By then India had lost its seventh wicket but Kapil was still there with Madan Lal for company.

What followed thereafter will always remain a golden chapter in Indian cricket. Kapil, always known for his swashbuckling brand of cricket, produced one of his most memorable batting displays in world cricket by remaining unbeaten on 175 at the end of the innings.

Kapil’s blast was incredible by ODI standards at that time. It was the highest individual score by a batsman in an ODI coming off a mere 138 balls including 16 fours and six sixes. Kapil, with wicket keeper Syed Kirmani (24 not out), shared an unbroken ninth wicket stand of 126 runs. The greatest regret that remained was that the match was not telecast live nor were the proceedings recorded for posterity.

This incredible win had set the tone for India’s unbelievable march as the team vanquished Australia by 118 runs in their last group engagement. India first hit up 247 with modest contributions down the line and then Madan Lal (4/20) and Binny (4/29) cleaned up the Aussies for 129 in 38.2 overs.

It was an unbelievable feeling that India was in the semifinals and would play England for a place in the final. As an Indian supporter, I was quite happy with the team’s performance and thought even if we lose in the semifinal, it would not hurt because who had expected India to win four out of the six preliminary matches and enter the last four in the first place?

Good news came in the shape of an information that a relative was procuring a television set as the semifinal and final matches were billed to be telecast by Doordarshan. England took the first strike and openers, Graeme Fowler and Chris Tavare  started with a flourish hitting up 69 for the first wicket. But the Indian bowlers Kapil (3/35), Binny (2/43), Amarnath (2/27) and off-spinner Kirti Azad (1/28) easily choked the flow of runs in the later overs, restricting the hosts to 213 in 60 overs.

The target being within reach, India weathered the attack comprising Bob Willis, Ian Botham, Paul Allot and Graham Dilley to win the tie by six wickets. Yashpal Sharma, a solid contributor, hit 61 while Amarnath made 46. Patil stroked freely to hit 51 not out off 32 balls as India romped home by six wickets. It was unprecedented! India was in the World Cup final! Unbelievable!

India was to clash with West Indies for the third time in the tournament. The Windies had defeated Pakistan easily by eight wickets in the other semifinal. I was ready before the television at my relative’s house.

In the final, India had virtually no answer to the pace and swing of the Caribbean pace battery as the team folded up for 183 in 54.4 overs. The batsmen could hardly play Joel Garner who had the analysis of 12-4-24-1. Anyway, we are going to finish runners up, no mean achievement for the team, I thought.

Balwinder Singh Sandhu caused the first flutter when he had Gordon Greenidge’s off stump pegged back early. King Richards, flamboyance personified, walked in and started to hit all round the wicket. He sped to 33 off 28 balls (seven fours) when he hooked Madan Lal. Kapil, who followed the ball, ran a fair distance before taking a miraculous catch in the deep.

Wickets continued to tumble and the problem was further accentuated when Lloyd suffered an injury. Dujon (25) tried to fight alone, but West Indies were bowled out for 140 in 52 overs. Madan Lal and Amarnath (who was declared Man of the Match) claimed three wickets each conceding 31 and 12 runs respectively. The unthinkable had happened! India were world champions!

As I returned home past midnight, crackers were exploding everywhere. It was time to celebrate India’s rise in world cricket.

Many thought that India’s World Cup victory was a fluke. But Kapil Dev and the boys had turned the world upside down. Cricket had become the national sport. The team began to show rare resilience and a faith in its ability.

India took part in the Benson and Hedges World Championship of Cricket, a one-day championship held in Australia less than two years later, where the team won all the matches including the final against Pakistan. Gavaskar was back as captain of the team. The victory signaled that the Indian cricket team had arrived and was ready to dominate world cricket.

Deadly Attack On Senior Citizen At Kalarahanga In Odisha Capital