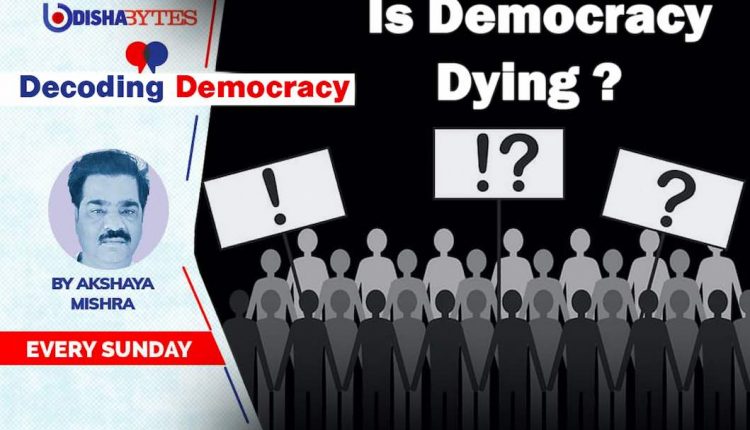 Is democracy dying? The answer to this depends on whom you ask. The diehard supporters of the current dispensation in India would say it is very much alive and kicking, and is, in fact, getting stronger. The opponents would offer an apocalyptic picture. The world has crumbled and collapsed, there’s no hope left, they would claim. In our polarised world, it is hard to find a middle position.

Surely, these are intriguing times. Facts are no more sacrosanct, truth is no more absolute, the reasoning is no more the sole basis of public decision-making, institutions are no more indispensable and there is no more anything not open to questions.

These are interesting times too. Never in the last several decades facts were put to ruthless questioning, never was the veracity of truth-challenged, never was the authenticity of reasoning as a decision-making tool under scrutiny and never ever genuine doubts on the purpose of institutions.

This being the chaotic framework presented to us, the contrasting views on the fate of democracy should not surprise us. If the proponents of change are convinced that the reality presented to us was make-believe, others view the new in a similar way. As neutral observers, if we endured the former for so long, we can surely be patient with the latter.

There are quite a few laments on the death of democracy already. Two scholarly works one read recently — ‘How Democracy Ends’ by David Runciman and ‘How Democracies Die’ co-authored by Steven Levitsky and Daniel Ziblatt — provide an elaborate doomsday account of democracy under leaders such as Donald Trump. Present-day authoritarian leaders, writes the former, have made military coups as an agent of political change redundant as they keep the myth of people power alive by assuming power through democratic means. They go on to subvert democracy by rendering institutions to safeguard it ineffectual and finally subservient to executive power. The latter mentions referees in the democratic game being co-opted and compromised. Others have drawn parallels with the Europe of the 1930s which witnessed the rise of totalitarian governments in Germany and Italy.

The issues and apprehension they raise are pertinent, however, what they appear to be lacking is an introspection on what went wrong at the people level. The demagogues certainly did not rise in a vacuum. In India at least, the developments post-2010 and the then government’s confusing actions offered a clear view of an imminent powershift in the country’s polity. Elsewhere, the conditions that facilitated their rise and now facilitate their presumed attack on institutions must have a basis in popular disenchantment. In this series of articles, we have tried to analyse the factors that could have led to the large-scale alienation of Indians from the institutional arrangement in democracy and the people managing it.

If democracy in its present form dies, it is because it never had a compelling argument for survival. If authoritarian leaders receive widespread popular approval, the question should be how the earlier lot lost it. Most analyses ignore this critical point. They also appear dismissive about the capacity of democracy to self-correct. The current phase is one of the people trying out fresher options. if it fails to meet expectations, it has to go too. People are a neutral element in this whole affair. Treating them as emotional fools who are easily carried away by propaganda reflects a poor understanding of them. It is fundamentally undemocratic. They stood by the earlier order for long too. If they are perceived to be part of the current problem, they are the solution to it too.

In India, so long as his opponents view the rise of Narendra Modi as an accident and an aberration of the normal, they would continue to fail to challenge him. His charisma counts, but the circumstances of his ascendancy count more. So far their attention is focussed primarily on the man himself — his oratorical skill, his penchant for optics, his supposed lies, his social media approach etc — and not on the latter. They can talk endlessly about capture of institutions under his watch but they would fail to convince anyone why the credibility of these sank so low under them. They would criticize him for mixing religion with politics but would fail to explain why secularism became a dirty word coming out of their mouths. They have to acknowledge that the normal is no more than they perceive it. They refused to do so after 2014, and even after 2019. Staying in denial won’t help their cause.

Coming back to the end of democracy predictions, the analysts could be overreacting. The old order is defeated but not dead yet. It can still stage a fightback if it reconnects with people and convinces them of its relevance to their lives. But evidence suggests they have failed so far. Nowhere is it more glaring than in India.