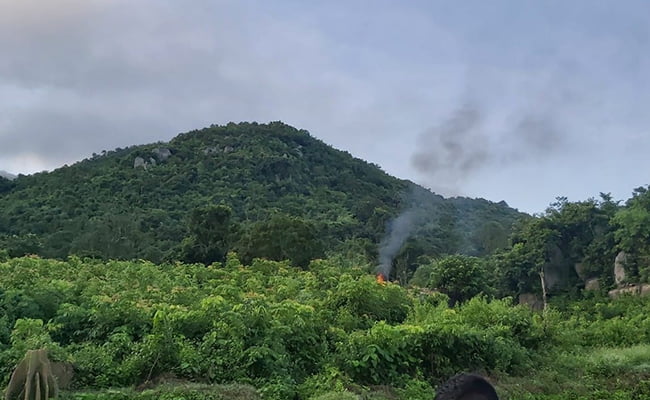 Global warming is the most complex problem that human society is facing. This is mostly caused due to various activities particularly unplanned industrial and urban development along with fossil fuel-based transport systems resulting in an increase in the concentration of greenhouse gases like carbon dioxide, methane, nitrous oxide, sulphur dioxide, chlorofluro carbon etc. in the atmosphere.

Since the industrial revolution to date, the earth’s temperature has gone up by about 0.80C, resulting in melting of glaciers and sea ices, fluctuation of weather, rise in seawater level, adverse effect on freshwater resources and health etc. In this regard, the forests could have played a very positive role. But, in the process of providing shelter, fuel, energy and food to all the growing population of the planet, the forests are being wiped out at a very fast rate.

Further, increasing urbanisation, land transport systems and industries are also responsible for expediting the rate of deforestation. It is estimated that, in the world, one acre of tropical forest vanishes every second and nearly four million acres disappear annually. In 1980, the total surface area covered by forests and shrubs amounted to about fifty-three million sq. km. The tropical forest and non-tropical forest account for 19 and 16.9 million sq. km respectively. In recent years, these have been vanishing at a much faster rate.

Forests, like oceans, are the most important ecosystem for our survival. They play an extremely important role in the atmospheric cycles of substances like carbon, nitrogen and oxygen. Forests help in regulating the climate and are involved in water balance and in the hydrological cycle. In addition, they protect soil from erosion, promote soil formation, provide different types of food, as well as a variety of economic and social benefits. Originally, forests covered about one-fourth of the land on this earth. They provided shelter to most of the animal and plant species and contributed considerably towards the development of new species than any other ecosystem.

In tropical countries, the conversion of forest into cropland is by far the leading direct cause of their loss. The fast increasing population in the developing world has transformed fuelwood collection into an unsustainable practice. The craze of the developed world for tropical hardwoods has encouraged many countries to ruthlessly cut their forests. In Latin America, the lure of cattle ranching is another cause of deforestation. Between 1961 and 1978, pasture in Central America, expanded to almost 53 per cent more while forests and woodlands declined by around 39 per cent.

The amount of carbon released by the conversion of forest areas into farmland is estimated to range between 0.7 to 1.7 GT. Since the beginning of the industrial revolution, atmospheric carbon concentration has increased from 275 ppm to 355 ppm. About 50pct. of this, is due to carbon dioxide emission by deforestation.

Intense industrialisation, resulting in air pollution and acid rain, posed a substantial threat to European forests. Covering about 31 million hectares in central and northern Europe, they are showing signs of very significant damage due to air pollution. During the last thirty years, the forest area in USA has also declined as grain export markets encouraged the conversion of forest areas to cropland and urban and industrial expansion have encroached on woodland. From 1963 to 1982, there has been a drop of 10 per cent in the total forest area.

In developing countries, with the increase in population and at the same time with appreciable improvement in the standard of living, the gap between availability and requirement of fuelwood is increasing. Some years back, the International Development Community has rightly recognized that villagers in developing countries possibly can form the labour force sufficient enough to plant trees in barren areas. In this task, it is necessary to mobilise villagers to promote the plantation of multipurpose trees to meet their immediate needs while providing fuel woods, oilseeds, organic pesticides etc. Nitrogen-fixing trees can be planted in shelterbelts or interspersed with crops. This can enhance soil fertility, moisture content of the soil and at the same time reduce erosion.

In 1985, an international task force estimated that about 395 million acres of the upland tropical watershed has been severely degraded due to cutting of trees, over grazing, low standard crop production practice etc. In the world, at least 247 million acres of tree plantation programme seems to be highly essential to restore and maintain the productivity of soil and water resources.

The financial investment for the plantation of such a big area just for ecology seems to be unattractive. In this regard, innovative projects are to be taken up in various parts of the world. For example, such a programme has been implemented in Colombia. Revenue from tax on electricity sales from hydropower is earmarked for afforestation and soil conservation in upland watersheds. As a result, the people living in low land areas are benefitting from reduced flooding and protection of their power supply and the farmers in the uplands gain from more crop production and a better ecosystem.

To green the earth effectively, it is necessary for every nation to stop the growth of human population, so that any further clearing of forest can be avoided. In addition to this, each country should implement projects for creating forests in mined areas and other barren lands and also plant more trees in the catchment areas of rivers as well as on both sides of the rivers. It would be more profitable to plant fruit-bearing trees like mango and jack fruits and oil seed-producing trees like Neem, Karanj etc.

Reforestation projects can be successfully implemented by involving local people in the planning and implementation stages and giving them due benefits. Some selected non-government organisations can also be involved in such programmes in a big way, by providing sufficient financial incentives.

Forest, being a major sink for greenhouse gases, protector for groundwater reserve and supplier of wood and other essential products, without further delay, efforts should be made all over the world to reforest the barren earth. Greening the earth through the application of scientific methods for rapid afforestation should be taken up jointly by the developed and developing nations as it is very vital for all human beings. This can be done through the application of better technology and developing genetically improved tree species, to maintain soil fertility, to improve water resources and above all to diminish global warming. It is high time that all human beings in their interest to change the present living style into a sustainable one, live in harmony with nature.