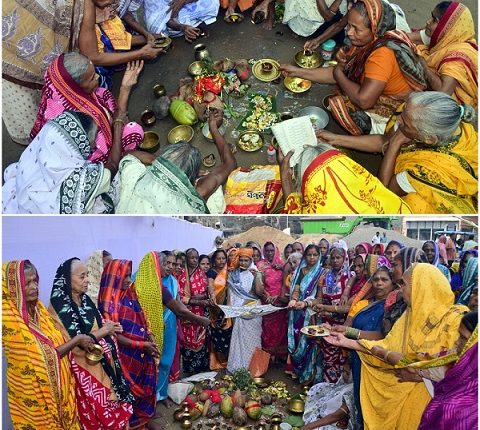 Bhubaneswar: The month of Kartika is believed to be the holiest of all months in the Hindu lunar calendar. It is known to be the best month of the year to become one with the Supreme Being. It is the sin-destroying month and almost overlaps October and November in the English calendar.

Kartika is the month that grants both worldly pleasures and salvation. This year, the month begins on a Monday i.e 14.10.19, which, according to believers, means that both Lord Vishnu and Lord Shiva are blessing them.

Most awaited month for Odias

This month holds a lot of significance for the Odias who observe many traditional festivals and rituals like “Habisha”, “Baluka Puja”, “Panchuka”, “Kartika Purnima” and “Boita Bandano”. According to Odia Hindus, someone who observes Kartika Brata will get happiness in life because it is the favourite month of both Vishnu and Shiva.

“There is no other month like Kartika or Damodar Masa, no other era like Satyajuga, no other scripture like Veda and no other pilgrimage as a dip in the holy Ganga,” said priest Bimal Panda.

In the Puranas, this month is said to provide all four goals (Purusharthas) of life – Dharma, Artha, Kaama and Moksha. The religious significance of the month was explained by Lord Vishnu to Brahma, who further explained it to Narada and from him to King Prithu, he added.

Kartika is the only month of the year when every lunar activity is celebrated as a festival.

It is the most awaited month of the year, particularly for widows and women of Odisha. Kartika Brata is observed for the whole month and important rituals that are followed include partial fasting and reading the Kartika Mahatmya from Padma Purana. A large number of pilgrims (particularly widows and women) flock to Puri to serve Lord Jagannath and observe fast.

The month of Kartika has the following significance:

Most devotees observing the Brata, take a pre-dawn bath and visit Jagannath Temple daily early in the morning during Mangal Arati. During the entire month, they take food only once a day in the afternoon, which is known as “Habisa” and the devotees undertaking the Brata are known as “Habisiali”. They either take Mahaprasad from the temple throughout this month or prepare their own “Habisa” food with specific vegetables and pulses.

In the Habisa food, a certain number of vegetables are prohibited from being used, such as brinjal, sweet potato, different varieties of gourds, a number of pulses and leafy vegetables.

Another important ritual of this month is the “Baluka Puja” in which devotees worship the holy Tulsi (Basil) plant as the image of Lord Jagannath.

The last five days of the Kartika month are considered highly auspicious and are known as “Panchuka”. During these five days, Odia Hindus are prohibited from eating non-veg food. And many people come to Puri to behold Jagannath, Balabhadra and Subhadra. During these five days, the three sibling deities and Sudarshan are dressed in five different Beshas (attires) each day.

The most important day of Kartika is the full moon day or Kartika Purnima as it is referred to by Odias. This day is the day when Sadhabas or merchants of Odisha used to sail to far-off lands with goods to do business. To this day and age, Odias perform the ritual of “Boita Bandano” to celebrate the glorious past of Odisha or Kalinga as it used to be known in the past.