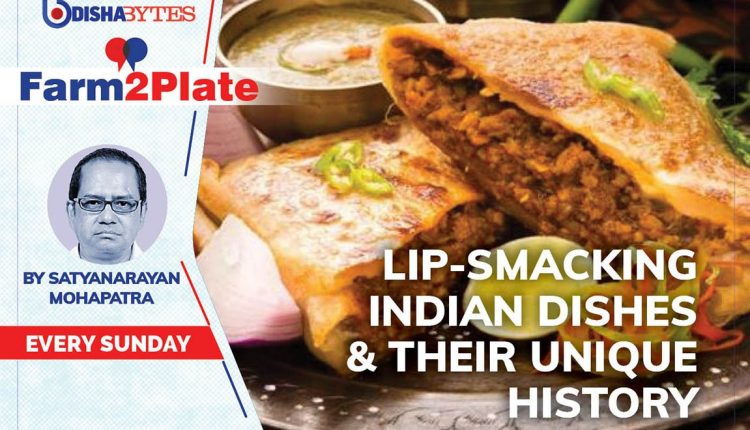 Did you know that Emperor Jehangir’s cook who created ‘Mughlai parantha’ was from Burdwan? That Chicken Manchurian was created in Kolkata? Does Malai curry owes its name to Malaysia or Portuguese traders who settled in Bengal? ‘Patthar Ka Gosht’, Pepper Fry Chicken, Apollo Fish… how did these dishes get their names? Let’s dip into a bit of food history.

The ‘Mughlai parantha’ originated during Jehangir’s time. Bored with simple paranthas with qeema (not kheema: that is a corrupted form of the Arabic qeema), he gave his cook Adil Hafiz Usman 10 days to think up something unconventional. On the ninth day Usman made zabir-fala or anda-roti. Jahangir was delighted and gave Usman 1,001 gold coins.

Usman was originally from Burdwan, now in West Bengal. He didn’t teach other chefs the complete process of making ‘Mughlai parantha’: he kept that for his son. When Burdwan became the Mughal Empire’s official revenue-collection centre for Bengal at the time of Shah Jahan, eateries serving Mughlai cuisine came up.

Origin of the Malai Curry: Though coconut is used mostly in East Bengal or Bangal food, it doesn’t really have a culture of using coconut milk as an ingredient in dishes, except for ‘Prawn Malai Curry’. There are two schools of thought on the origin of the ‘Malai Curry’. One is that it was brought to Bengal by traders who had business links with Malaysia. Hence it is referred as — Malai or Malay Curry.

Bengal was a major trading point with South East Asia since the days of the Mughal Empire. The Portuguese came to Bengal in the early 1500’s. The Portuguese left a big impression of their cuisine wherever they set shop. Bengal was no exception. Portuguese cheese-makers are considered to be the precursors to the present day Bengali sweet-makers who probably learnt the art of curdling milk to make chenna from the Portuguese. One can’t also ignore the similarity in thought process between the Bengali ‘Malai Curry’ and the ‘Prawn Temperado’.

The Chinese dishes: Chinese food in India originated from Chinatown in Kolkata. Chinese people migrated and settled down here somewhere in the 1800’s. These were the Hakka Chinese, who speak Hakka language and not Mandarin. Kolkata has the only Chinatown in India. There are many pockets of Chinese people who moved out of Kolkata and settled down in other Indian cities.

For these innovative variations much of the credit goes to Nelson Wang, a Chinese restaurateur who owned the legendary ‘The China Garden’ chain of restaurants. He created the all-time popular dish that we relish today, the Indian/Chinese dish ‘Chicken Manchurian’. According to Wang himself, he was a cook at the Cricket Club of India when, in 1975, a customer asked him to create a new dish, different from what was available on the menu. He started by taking the basic ingredients of an Indian dish, namely chopped garlic, ginger, and green chilis, but next, instead of adding ‘garam masala’, he put in soy sauce instead, followed by corn starch and the chicken itself; the result was the now-famous ‘Chicken Manchurian’.

In the south too one has decent numbers of Chinese who migrated from Kolkata. Many of them opened restaurants, some of which are still around. Unfortunately, their main focus has been and still is to make ‘Chilly Chicken’ and likewise. Indian-Chinese has been run down like no one’s business. Though Indians are the main culprits, most Chinese also can’t escape the mediocrity of Indian-Chinese food in their restaurants. Whenever I think I’ve found the worst ‘Chilli Chicken’, the next one comes along in a few days.

South-Chinese, unlike Indian-Chinese, has no resemblance to Chinese food. Some of them are:

Pepper Chicken Fry: I was very surprised when I saw the ‘Pepper Chicken Fry’ being made. I’d expected more like a traditional South Indian style chicken roast/fry masala, as that’s what the name implies. And was taken aback with what I saw. The flavours were robust southern flavours, but with Chinese elements. But overall it was tasty. Somewhere these Chinese elements have been adopted by local chefs/street food vendors and these fiery dishes created over the years. It was done to satiate the cravings of the local populace.

Apollo fish: Somehow I get the feeling that it seems to have been heavily influenced by the recipe of ‘Chicken 65’, which most probably came to Hyderabad from Chennai. Though there are many theories on the origin of ‘Chicken 65’, Buhari Hotel in Chennai’s on the forefront of this. But now ‘Chicken 65’ is far more popular in Hyderabad than in Chennai. ‘Apollo fish’, on the other hand, has firmly stayed in Hyderabad. I’ve not seen this dish anywhere else and the ‘Apollo fish’ recipe is very typical. It’s a bit tough to categorise the ‘Apollo fish’. It’s more like Indian-Chinese meets fiery Telugu food. So let’s call this ‘Telugu-Chinese’ for lack of another name. The ‘Apollo fish’ recipe uses curd aka yogurt in a prominent manner. Why the name, ‘Apollo fish’? I’ve searched high and dry, but no luck. It could’ve been invented in the 70’s and named after the Apollo Mission.

History & origin of Patthar Ka Gosht: Being an avid learner, I am always intrigued about various things I like, and this quest leads me to learn more about various cuisines and dishes. Hyderabadi cuisine is one of my favorite and in the quest to know more about the famous ‘Pathhar ka Gosht’, I was extremely intrigued to know about how this brilliant preparation took its origin. During Mahboob Ali Pasha’s reign when he was 18 years old, he was on a hunting jaunt and wanted to have kababs. As his order had to be obeyed so his shahi bawarchi managed to find a slab in their load and made a good use of it for the purpose. He liked it so much he decided to have it again on his return to Hyderabad, there they made a smooth slab and made even better kabab, so called ‘Pathhar ka Gosht’.

Such is the heritage which surrounds our cuisines and traditional methods of cooking. I always believe that traditional cooking and methods is what beholds our beautiful past as well as is the future.

In my opinion the traditional Indian cuisine is what will continue to awe the world and I would be very happy if the focus of the current and future generation will help to revive our tradition.