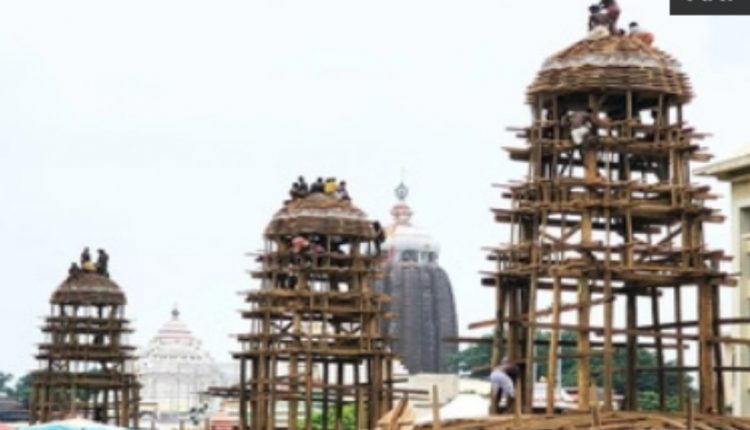 Every year, three new chariots are constructed for the Rath Yatra in Odisha’s Puri town. It starts with collection of wood on Basant Panchami (February-March), which is considered the most auspicious day for starting construction activity in the Hindu calendar.

Earlier, the king used to take the responsibility of collecting wood and supervising the construction of chariots. With abolition of kingship, the forest department of state government has taken up the work. The chariots are made of only Phasi, Dhaura and Mai Simili wood.

Each chariot has its own style, height, diameter etc. The chariot of Lord Balabhadra, called Taladhwaja, has 14 wheels, each of seven ft diameter, and is covered with red and blue cloth. Its height is 44 feet, length and breadth of the Chariot is 33 feet by 33. Total 763 pieces of wood are used in this chariot. The chariot’s name flag is called Unnani.

The chariot of Devi Subhadra, known as Darpadalan, is 43 feet high with 12 wheels, each of seven feet diameter. It is decked with red and black cloth. The length and breadth of the Chariot is 31.6 x 31.6 feet. Total 593 pieces of wood are used in this chariot and its flag is called Trailokyamohini.

Lord Jagannatha’s chariot, called Nandighosa, is 45 feet square at the wheel level. It has 16 wheels, each of seven feet diameter, and is decked with red and yellow covering of cloth. The length and breadth of the chariot is 34.6 ft x 34.6 ft. Total 832 pieces of wood are used in this chariot whose flag is called Nadambika.

Each chariots has nine Parsvadevatas (guardian deities) around it and four wood horses. Each chariot has a Sarathi (charioteer). They are called Matali, Darruka and Arjuna for the chariots of Jagannath, Balabhadra and Subhadra respectively. However, during Nabakalebara Rath Yatra, the Parsvadevatas, Sarathi, horses are also newly constructed with Neem wood and remain with the deities till next Nabakalebara.

The whole process of building chariot is passed on from one generation to another of the carpenter community. No scale or calculator is used for measurement. Rather, the head carpenter uses a stick and rope to measure and calculate.

In ancient times, the Rath Yatra of Puri used to comprise six chariots compared to three at present. As a river was flowing  between the Gundicha temple and the Jagannatha temple at the time, three chariots stayed in readiness on the other side of the river to receive the deities from the three chariots that carried them from the main temple.

Also Read: No Manuals, No Machines, No Feet Or Inches But Identical Year After Year: The Making Of The Puri Rath Yatra’s Chariots