Mahatma Gandhi, The First Celebrated Indian To Declare His Love For ‘Pakhala’! 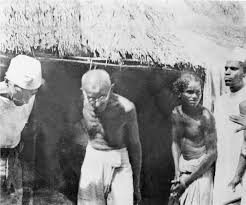 Bhubaneswar: The traditional ‘Pakhala’ (fermented rice), the most loved Odia dish, had an admirer in Mahatma Gandhi as well. During a visit to Odisha in 1935 to undertake a Harijan padayatra from Puri, Gandhi could not hide his admiration for the dish.

Noted writer Dash Benhur said Gandhi would enquire more about ‘Pakhala’ and its preparation from Ramadevi Choudhury (Rama Devi). who was among the hundreds of followers participating in the padayatra. He was curious and equally delighted seeing Rama Devi serve it to followers on a hot May afternoon during the course of the journey.

He was deeply touched by the Odia culture and the people. His humility and the ease with which he could connect with them endeared him to one and all. “He was probably one of the first celebrated Indians who had declared his love for Pakhala,” Benhur had said at a literary meet here.