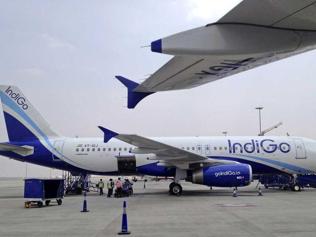 Bhubaneswar: It was a close shave for passengers of a Bhubaneswar-bound IndiGo flight, which took off simultaneously with another bound for Kolkata from the Kempegowda International Airport’s parallel runways in Bengaluru on January 7.

The two flights with hundreds of passengers on board came very close to a mid-air collision shortly after taking off, at an altitude of over 3,000 feet, when a radar controller spotted the potentially grave error and alerted the pilots.

On being alerted, the Kolkata-bound flight swerved left and the jet heading towards Bhubaneswar took the right to avoid a collision, the Times of India reported.

Notably, the distance between the two airstrips was not sufficient enough to allow parallel and simultaneous take-offs or landings.

The “breach of separation” was, however, not reported to the Airports Authority of India, sources told NTDV, quoting a preliminary report by the Directorate General of Civil Aviation (DGCA). This happens when two aircraft cross the minimum mandatory vertical or horizontal distance in airspace.

“On January 7, 2022, two IndiGo flights — 6E-455 to Kolkata and 6E-246 to Bhubaneswar — were involved in breach of separation at Bengaluru airport. That morning, Bengaluru airport’s north runway was meant to be used for take-offs and south for landings. Later, the shift in-charge (WSO) decided to have single runway operations by using the north runway for both arrivals and departures,” a senior DGCA official was quoted as saying.

Directorate General of Civil Aviation chief Arun Kumar told the national daily that “strict action will be taken against” those found responsible for it.

Can These Tribal Boys From Odisha Repeat The Feat Of Prince Dance Group At ‘India’s Got Talent’?