More Snakes Stray Into Human Habitations: Follow These Precautions To Keep Reptiles Away 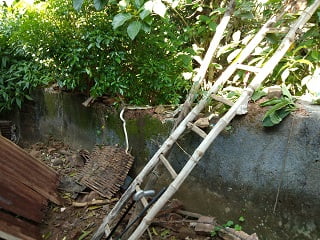 Bhubaneswar: A 13-foot-long King Cobra was rescued from a house in Deulasahi area in Dhenkanal district on Saturday. The snake is suspected to have entered the house from a nearby forest.

The rescue of King Cobra was among the several such incidents which are being frequently reported in human habitations across Odisha.

In another incident, on October 24 a highly poisonous bamboo pit viper snake was rescued from the densely populated Bapuji Nagar in Bhubaneswar. A cobra was spotted in the kitchen of Gopabandhu Academy in Bhubaneswar, while another cobra was trapped in a fishing net in a garden of a private residence in Cuttack district.

What are the reasons for the rise in such incidents of reptiles straying into human incidents? Snake helpline general secretary Subhendu Mallik shares the reasons and precautions to  be taken with Odishabytes.

Why has there been a spike in sighting of snakes in human habitation?

There are several reasons behind it. One of the major reasons is human encroachment, for which, wild animals and snakes are coming out of jungles.

“In the rainy season, we see more reptiles in human habitation. Because, the rains fill their habitats with water, following which, they come to land,” said Subhendu.

Snakes usually eat insects, frogs, other reptiles, earthworms and even small birds. “Sometimes, following frogs, rats or any insects, snakes crawl into the houses or human places,” he reasoned.

He said the offsprings of most of the snakes like cobra and python emerge out of the eggs and vipers, vine snakes, boas etc directly give birth to young ones from June onwards. The mother snake doesn’t take care of its babies. The babies have to hunt for prey on their own.

“By the time the monsoon arrives, most of the baby snakes move on land surfaces. With rain water entering into the burrows, those are forced to come out and search for higher and drier places in human habitations,” Subhendu said.

“We see flying insects or bugs swarm around the lights during Diwali. Sometimes, frogs enter into the house to eat them. Then snakes will come to eat frogs. Interestingly, when snakes are born, frogs also give birth at that time. Small snakes used to eat small frogs. God has created food chain like that,” he added.

We should clean our houses and its surroundings. Keep your lawn and garden clean. Otherwise the snakes will get place to hide. Usually, snakes feel safe at homes, as there are no dogs, cats and birds to disturb them.

Close the snakes’ paths, like small holes in the house. If a frog or rat enters the house, snakes may follow them. Check entry points of the house.

Many people use chemicals to get rid of snakes. “If we use more chemicals, it will be harmful for elderly people. Some people advice to use carbolic acid, but it is harmful for asthma patients. We can use black phenyl,” suggested Subhendu.

The most important thing is that people should keep their surroundings clean, so that the snakes will not get any place to hide, he added.

“If you have a watery garden, it will attract frogs, lizards and rodents, which attract snakes. You should take care of it,” this should also be taken care of, he alerted.

“We advise people to attach net in the surroundings of the house, especially in the doors, so that snakes cannot enter into the house,” said Subhendu.

Do Snakes Come Out In Winter?

Snakes are cold-blooded animals. They will search warm places to stay in winter. They will be less active in winter months. “They will not be seen December onwards. To avoid cold, they will stay in warm places and eat less during that period,” informed Subhendu.

“Call us, if you spot a snake. Please don’t kill snakes. Don’t panic, if you see a snake. Do not even try to threaten the snake. You should stay vigilant till snake helpline members come,” said Subhendu.