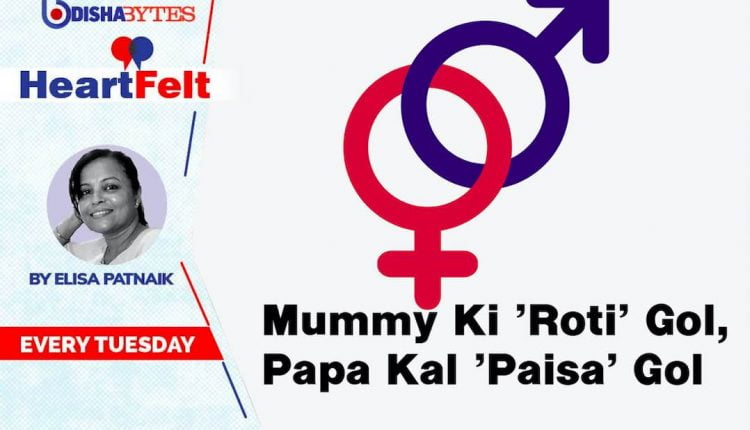 My son as a four-year-old used to regale us with a popular Hindi poem: Mummy ki Roti gol, gol, Papa ka Paisa gol gol. Not discounting his endearing recital, I always used to be a trifle annoyed at the stereotyping of Mummy’s ‘Roti’ and Papa’s ‘Paisa.’ The other circular references in the poem insinuating gender typecasts included – Dadi ki Bindi, Didi ka Kangan as compared to Dada’s Chasma and Bhaiya’s Ghadi.

I was hoping, as compared to a few years ago when conventional gender portrayal was rampant in school textbooks and curriculum, it would have advanced to a positive and progressive representation. But I was both disappointed and perturbed as it was not to be. While a few schools and national publications have attempted to disrupt this course, the majority continue with its propagation.

So, the Engineer, Banker, Doctor, Police personnel is always a man and a Teacher, Nurse, Artist is always woman; The mother is always seen in the kitchen, serving family members, or taking care of a sicky person while the father is seen reading a newspaper, sipping a cup of tea, or returning from office. The images and pictures normalize males doing physical work, as breadwinners of the house, and operating outside the house and women doing softer tasks confined to the domestic space.

History, Civics and Social Studies’ textbooks continue with the marginalisation of women with misrepresentation or no representation of female personalities and characters in occupations, India’s freedom struggle, social reformers etc. in both texts as well as illustrations. The overall portrayal of girls and women is largely through caring and gentler roles defined in relation to men, as a daughter, sister, wife and restricted to the house. The curricula reinforce the stereotypical image that men dominate the public sphere and women the private sphere.

But what clearly takes the cake is the outrageous, regressive, and misogynist comprehension passage in the recent Class X CBSE English exam. The passage contained statements such as ‘women gaining independence is the main reason for a wide variety of social and family problems’ and ‘wives stopped obeying their husbands and that is the main reason children and servants are indiscipline.’ This is the year 2021 mind you, and the exam paper has been set for impressionable 16-year-olds on the verge of beginning a new phase of their lives as young adults.

Gender stereotyping and fallacious notions about the gendered division of labour are among the earliest things we impart to our children in our homes and families directly and indirectly. It gets further influenced when they start attending schools and subsequent educational institutes later. And by the time the education is complete, these notions and norms establish strongly in their minds which they unconsciously confirm to in their own lives. Educational content reinforces traditional gender norms, labour stereotypes not only perpetuate conservative notions about women but also undermine their contribution leading to sexism that sees women as just mothers, wives, sisters, and unpaid, low-status workers.

We have all seen how the education system, textbooks and other study materials stereotype gender roles and often overlook the contributions of women thus propagating the existing gender bias and typecasts. Young children in their formative years are moulded by the cast of gender stereotypes and biases from their early childhood which gets reinforced with such repeated exposure in schools and through study materials.

Education plays a vital role in shaping ideas, thoughts, and beliefs among young impressionable minds. And schools are the foundation, which forms the first notions about gender, gender socialisation, equality, and inclusivity. They are also an important medium of internalising gender roles and stereotypes directly and indirectly. The mind of a child is still immature to question the established norms and they tend to adopt what they see making these gender roles look normal. By validating the prescribed “feminine” and “masculine” social and behavioural norms, stereotypes, and roles, we constrict their minds instead of truly enlightening them.

Textbooks not only follow gender stereotypes but also reflect the existing patriarchy. Boys and men are shown as active participants engaged in physical activities while girls and women as depicted as passive members more involved in their nurturing and supporting role. Female characters in stories are represented in traditional and secondary roles and male characters as heroes and saviours.

The trend is seen not just in the language, illustrations, and pictures but also in the examples given. For instance, in maths examples, the boys buy toy cars, bats and balls, but girls always buy bangles or dolls. The mother is always seen buying vegetables and groceries walking while the father is seen commuting to his office in a two/four-wheeler. In addition, the invisible and unpaid domestic work done by women goes completely unrecognised in the textbooks.

Worse, some of the content degrades women as well. Textbook content on ‘ideal female figures,’ comparing a woman ‘to a donkey,’ justification of ‘dowry for ugly and handicapped girls’ have been reported in some of the school textbooks.

The few gender audits of textbooks undertaken in both government and private schools have brought to light such glaring instances of gender stereotypes and depiction of existing conventional power and social structures.

And it’s not just the curriculum but also the teachers who deliver the content which also fortifies the prevalent biases. In classrooms, teachers sometimes perpetuate the dominant notion that boys understand and prefer science, technology, mathematics, and sports better, whereas girls like and perform better in humanities and arts.

A 2020 UNESCO report titled ‘The Education of Girls in Asia and the Pacific,’ explains how curricula and materials reinforce these gender stereotypes. It says that women and girls are grossly under-represented in school textbooks across the globe – including India – and when included in the narrative, are largely depicted in traditional and stereotyped roles. It points out that ‘strength, stamina, and intelligence,’ were qualities that were largely ascribed to, and celebrated in, men, while traits like being ‘understanding and kind’ were celebrated in women. Showing women in voluntary roles and men in paid jobs, are among the gender stereotypes mentioned in the report,

Interestingly, the Report takes note of attempts by few countries to revise textbook images to reflect gender balance, including the revision of many textbook images to remove gender stereotypes by the Maharashtra State Bureau of Textbook Production and Curriculum Research in 2019. The Grade 2 textbooks for example, now show men and women sharing household chores, along with a female doctor and a male chef and the students asked to note these images and talk about them.

A few institutions and governments are now proactively coming forward to herald this change. Such as the Government of Kerala which has now taken a decision to go for gender audit of textbooks from pre-primary to the university level and revise them as required.

I was pleasantly surprised seeing some progressive and equitable gender representations in my daughter’s Class 5 text books. In a Science chapter on ‘Safety and First Aid,’ the picture of a boy cutting vegetables with a knife and a girl plugging a plug were refreshing changes. And so was a female shopkeeper and a boy rolling chappatis while explaining force can change the shape of an object. There were women doctors and scientists too.

Although such steps on gender-sensitive education is welcome, a lot more needs to be done. Besides regular gender audits to make course corrections and training of teachers on gender-sensitive teaching, sensitisation workshops with both male female students and teachers together will help dispel norms, redefine conventional notions of gender and also create an equitable ecosystem in the educational institutes.

So hopefully, the poem will be revised to Papa’s Rotis and Mummy’s Paisa soon!