My Helpless Rage Against Rape 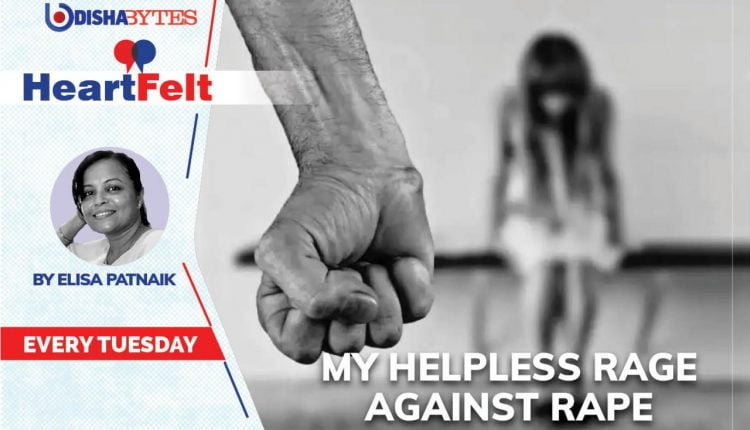 As I turn the pages of the newspaper each day, not a single day passes without the reported news of at least one girl or woman getting raped in different places of India. So common and recurring that it escapes attention, represented in a few square centimetres in a single column or buried in the inside pages of the newspaper. It gets prime time national attention or a screaming headline only if it’s a violent rape, involves a public figure or there are protests around it.

The age of victims is not a factor and neither is the type of clothes worn by them. Victims of rape range from as young as six-month-old baby girls to 87-year-old grandmothers. So when an elected representative recently gives a statement that – “rape cases are increasing as some dresses worn by women excite men, which is not good, because women have respect in our country, we regard them as mothers,” – one really doesn’t know how to react.

According to the National Crime Records Bureau (NCRB) data, India recorded an average of 77 rape cases daily in 2020 totalling 28,046 such incidents during the year. Of the total rape cases reported every day, around 40 % of the victims are minors and in nearly 90 % of the cases, rapes are committed by relatives and family members, or people known to the victims. The actual numbers are probably much higher as many rapes go unreported.

My two encounters with rape survivors have been varied but equally disconcerting. One was during my post-graduation days in a central university campus where a research scholar on her way to the laboratory was dragged into the thick bushes by a group of drunk anti-socials who had sneaked inside the campus to have fun. The woman was gang-raped by the group of men, who were complete strangers. Needless to say, the campus erupted in protests and I and my friends were shocked for days wondering it could have been any of us. The other is a former young colleague who was raped by her own favourite uncle as a teenager. The uncle is no more but my colleague still bears the scars and trauma of the violation especially because of her inability to share the incident with her parents till now.

In this patriarchal, gendered, and inequitable world, rape continues to be an easily available means for men to fulfil their sexual urges, satisfy their lust, take revenge, a justified means to control, dominate and crush women. The worst, biggest and the ugliest threat a man can give a woman is “I will rape you.” As a crime that stigmatises women and casts aspersions on the victim instead of the accused, rape has indeed emboldened men who commit the crime and escape punishment.

Personally, as a woman, mother, and feminist, I feel enraged, despondent, and worse, helpless. As empathetic, involved, and active citizens, we have raised our voices, expressed our anger and dejection over the rising violation of women through rape and other sexual assault. But when it comes to actions to either prevent such heinous crimes or to dispense swift justice to the victims/survivors and their families, the onus has been largely on the individuals or rather girls and women themselves. Come home before dark, don’t venture out at night, don’t travel alone, wear decent clothes, don’t entice men through your behaviour, don’t have male friends, learn self-defence…

These very beliefs associated with the prevention of rape are instantly deflated when we scrutinise the facts. Do dresses really ‘provoke?’ Do women bring out the beast in a man, arouse and entice them? Then why are 6-month-old babies, bed-ridden women, grandmothers in their last stages of life, women in sarees and burqas raped? People rape their daughters, nieces, cousins, girlfriends, friends, students, and acquaintances. Husbands rape their wives as well.

And the brutality of some of the rapes leaves one physically gasping with horror and generates deep anger. From burning to mutilation of private parts – the inhumanness, sadism in many of the cases are not only disturbing but also enraging. How does one account for such extreme physical abuse?

I often wonder at the causes of such extreme depravity and have tried to decipher the male psychology from my husband, male friends, and psychological counsellors. That most men still view women as sexual commodities is nothing new. But for some men, their obsession with sex and instant sexual gratification overrides all matters and consequences. I remember reading some young men’s sexual explorations also included forced sex.  Females are viewed as commodities, meant to be consumed and ravished. Sexually obsessed rapists don’t consider women as human beings but as an object that can be violated with impunity.

Rape is also a power crime that satisfies the desire to control women and assert power over them. And forced sex in rape requires a man to be aggressive, superior and in control.

In India, where women are either worshipped or slut-shammed, rape is also connected to their honour and rape as an instrument to avenge. Since time immemorial rapes were committed during wars, in inter-family feuds when women were violated to punish their owners and protectors, the men. When a woman is raped, she loses her “honour” leading to the family’s loss of honour as well. It is also believed that good and virtuous women do not get raped. But spurned suitors, jilted lovers and other men, who cannot take no for an answer, rape these good and virtuous women as a punishment.

Some also rape because they are psychologically ill, others when they are socially disenfranchised or disempowered and are unable to be with women. But the majority of the rapists are driven by deep-set misogyny and toxic masculinity. So much so that most of the time the accused are not even aware that what they have committed is rape. They admit to forced sex but refuse to accept it as an act of rape. In gang rapes, and repeated rapes men don’t know when to stop because they fail to comprehend the concept of consent.

Why Men Rape – is a detailed investigation into the reasons for rising rapes in India by author Tara Kaushal through the narratives of Indian men who have committed acts of sexual violence and rape. Kaushal, in her interviews, found that none of her subjects understood the concept of consent from women or the need for it in a sexual relationship. While a serial gang rapist refused to accept the idea of rape, a doctor narrates how he raped a 12-year-old bedridden patient following an operation, in full awareness of the trauma he was causing.

There is no dearth of rape myths in our society that not just perpetuate false beliefs about it but also encourages victim-blaming and shaming, exonerating the perpetrator. The onus for moral policing and safety is largely on women. Myths such as – Women wearing revealing clothes are asking for it; A woman’s No means yes; A woman never says yes in the first instance; Women enjoy forcible sex; Women who drink are easy to get; Smart, independent women have sex easily etc. – are linked to the conduct and character of women.

Although rape is a non-bailable offence in the Indian Penal Code, the accused often get bail due to lack of evidence. Low conviction rates and delays in the judicial system are not only frustrating but lead to vigilante justice. Heinous crimes like rape have a very low conviction rate of less than 40%.

No matter how alarming the rising rape cases sound, one realises that addressing a complex sexual offence like rape is not easy. While a combination of preventive and curative actions like sex education, safety measures for women in public spaces, better policing and speedy and sensitive redressal systems are needed, I feel the most crucial step is how we bring up our boys.

Boys in our homes and societies are brought up with notions of toxic masculinity, a sense of entitlement and regressive notions about girls and women. So much so that forced and violent sex is not considered a crime but normal and acceptable. Men grow up assuming that it is their right and it’s natural for women to resist.

Engagement with boys on gender issues, raising awareness on sexuality, consent and respect and equality for girls and women is primary. Violence against women is so deeply rooted and normalised in India that such sensitisation should be prioritised not only as a part of the education curriculum but emphasised continually in our popular culture and the message disseminated across all programmes. It’s equally important to encourage and support girls and women to strengthen their voice and agency and to be intolerant of any sexual violations and transgressions.

It’s time to shift the rape discourse from women to men. Asking women not to step out of the house late at night, travelling unaccompanied, barring women from certain places and activities will certainly not stop rapes. Respect and equality for women in our own homes and raising feminist boys and men certainly will.

Time To Raise A Toast? Red Wine May Protect You From COVID, Says Study

Is Your Child Scoring Low Marks, Has Behavioural Issues? Your Smoking Could Be A Reason