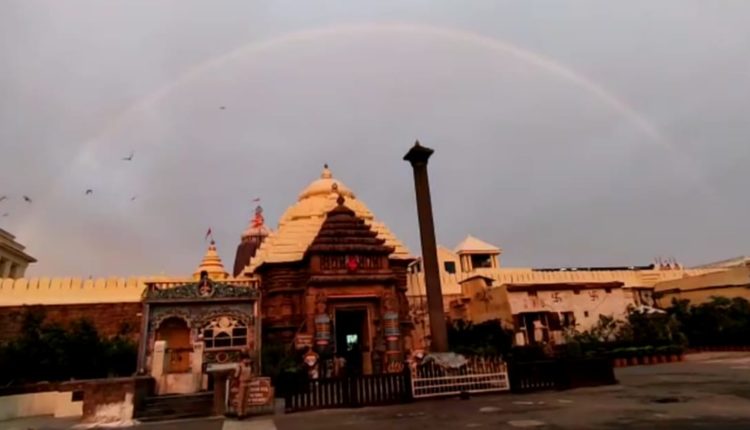 Puri: The rare Nagarjuna Besha of the sibling deities at Jagannath Temple was delayed by almost 3 hours and began at 7 am instead of 4.45 am following some dispute between Bhandar Mekap, Khuntia and Singhari servitors over the gold ornaments.

According to reports, controversy also erupted over the engagement of more number of servitors for the rituals. The Besha rituals finally began around 7 in the morning after the intervention of the temple administration.

Puri reverberated with the sounds of ghanta, kahali, mahuri, bells and ‘Jai Jagannath’ chantings as the special Naga attires for the Besha rituals arrived at the temple. After Abakash Niti, the deities were dressed up in the ritual called Mailam.

The sky was decorated with a beautiful rainbow early on Friday morning as the rituals were underway.

On this occasion, the Lords are dressed as Naga warriors with golden weapons, including arrows, bows, Hala (plough), Chakra (wheel), Musala (mace), dagger and knife, to commemorates the slaying of Shahasrajuna by Parasurama.

In view of COVID-19 pandemic, the rituals will be observed sans devotees in presence of servitors and temple officials this year.

Besides sealing the entry points to the Pilgrim Town, the Puri administration clamped Section 144 around Srimandir and a portion of Bada Danda (Grand Road) till Marichikot temple from 2 am of Friday to prevent huge congregations of devotees.

Vehicular traffic will not be allowed beyond Marichikot temple.

Mobile phones are prohibited inside the temple.

A three-tier security is in place at Puri. A total of 25 platoons of police force have been deployed in the town, along with two Additional SPs, seven DSPs, 75 Officers and 250 Home Guards.

Sakala Dhupa and Bhoga Mandapa- 10.30 am

According to some members of the Jagannath Temple Managing Committee, the Nagarjuna Besha of the Lords will be held in November next year. However, they said that the exact date of the rare ritual will be known only after the publication of the new almanac.

Also Read: Nagarjuna Besha In Puri Jagannath Temple To Be Held Next Year Too!