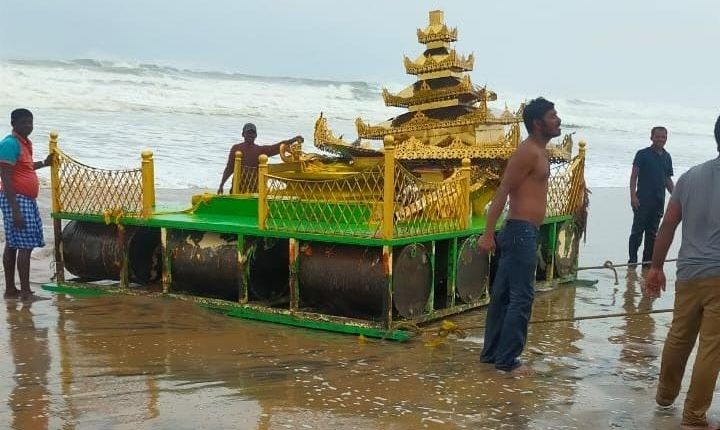 Bhubaneswar: The mysterious golden coloured chariot-like structure which got washed ashore on the coast at Sunnapalli harbour in Srikakulam district, is in fact a pagoda which the Burmese people release into the water bodies as part of their New year celebrations.

The people on the coast at Sunnapalli harbour in Srikakulam district saw the structure floating in the turbulent waters on Tuesday and pulled it to the shore. Some locals claimed that the chariot had something written on it in Malay, Malaysian language.

Explaining about the structure historian Anil Dhir said, “Buddhist new year is celebrated in Myanmar, Vietnam, Thailand, Sri Lanka and during this time they sail such huge structures like the Odias do as part of ‘Biota Bandana’ celebrations. This is an annual celebration for them.” The Buddhist new year falls in April every year and during this time people sail structures designed like pagodas.

Dhir said this particular structure may have come floating from Myanmar where the people sail such chariots in Irrawaddy. Stating that this does not have any historic relevance, he said what is surprising is how it floated all the way from the neighbouring country with little damages.

While locals in Srikakulam claimed that there are some inscriptions on it, probably in Malay, Dhir said it has to be deciphered to ascertain which language it is, the historian stated that the pagoda design resembles those of Burma.

The video showed people dragging a chariot from the sea to the shore. The