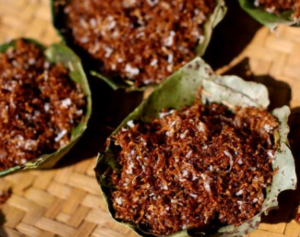 Bhubaneswar: Mayurbhanj’s superfood ‘ant chutney’ is set to find more tables with a meeting for granting a Geographical Indications (GI) tag to the dish scheduled to be held in Odisha capital on December 6.

The Odisha University of Agriculture & Technology (OUAT) in December 2020 submitted an application with the GI Registry seeking the tag for ‘Kai Chutney’ under the foodstuff category.

In response, the office of the GI Registry has formed a Consultative Group of Experts to ascertain the correctness of particulars furnished in the application and a meeting has been fixed for December 6 in Bhubaneswar.

“The Consultative Group will ascertain the correctness of particulars furnished in the GI Application and Statement of Case referred to in Rule 32(1) of Geographical Indications of Goods (Registration and Protection) Rules 2002 and make necessary recommendations,” the GI registry said in a letter to the Chairman of Technology Management Cell, OUAT.

The applicant has been asked for a PowerPoint presentation to support the claim. Five experts of Red Ant from Mayurbhanj will be present at the meeting.

The red ants are consumed in the form of a watery semi-solid paste which is known as ‘Kai Chutney’, which is celebrated among tribal communities of Mayurbhanj not just for its fiery taste but also for its medicinal properties. Red weaver ants are indigenous to Mayurbhanj and are found in abundance in the jungles there, including Similipal.

According to reports, the dish in the form of Chutney or soup is given to people suffering from jaundice, common cold, joint pain, cough and poor eyesight. The community people also prepare oils by soaking these ants to use for skin issues like gout and ringworm infections. It is rich in valuable proteins, calcium, zinc, vitamin B-12, iron, magnesium, potassium, sodium, copper, fibre and 18 amino acids, and is known to boost the immune system and keep diseases at bay.

In June, researchers had also written a letter to the Ministry of Ayush for the recognition of the ‘Kai Chutney’. PWD Assistant Engineer Baripada has mentioned that people from the indigenous community consume this delicacy abundantly and could make a living by selling it.

The GI tag would help develop a structured hygiene protocol in the preparation of ‘Kai Chutney’ for standard wider use. It would also help to enhance the reputation and value of the product and support local businesses.

Bizarre! Woman Strangles Husband To Death For Complaining About Ants In Rice In Odisha