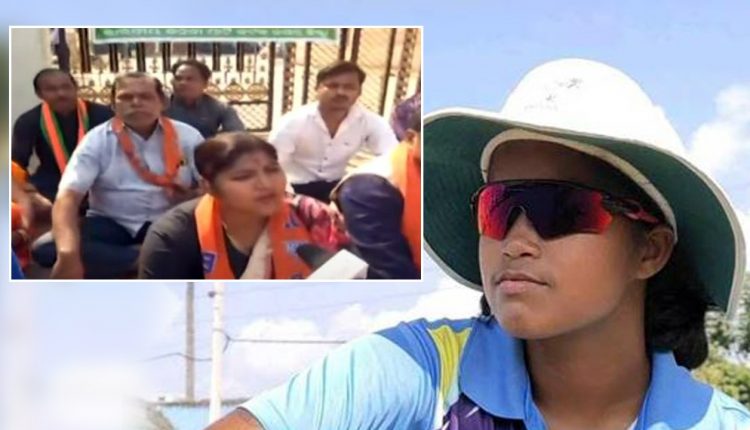 Cuttack: With mystery surrounding the death of woman cricketer Rajashree Swain, BJP workers on Saturday staged a demonstration in front of the Odisha Cricket Association (OCA) office in Cuttack demanding a high-level and impartial probe into the incident.

Terming the 26-year-old woman cricketer’s death as a case of murder, activists of Cuttack city unit of BJP claimed that there were injury marks on her head and sought an impartial investigation into the incident.

Raising slogans against OCA and the state government, leaders of the saffron party sought to know as to how the womanl went into the forest around 22 km from her house to commit suicide.

Alleging that it is a clear case of murder, they demanded probe by an independent agency to unravel truth and book those responsible for Rajashree’s death.

Stating that a letter, purportedly written by the woman cricketer, has been found from the site, they said it held two people, including a coach and former OCA member, responsible for her death.

The protesters also pointed out that the family members of the woman have also alleged that she has been murdered and demanded a proper investigation into the incident.

The 26-year-old cricketer went missing on January 11, a day after she failed to make it to the final list of 16 players for the BCCI Senior Women’s one-day trophy (BCCI Domestic Season 2022-23), which starts in Puducherry from January 18. Her coach Pushpanajli Banerjee lodged a missing person complaint at the Mangalabag police station when she did not reach home and her phone was found switched off.

Some locals spotted a scooter and helmet on the Bramhanabast-Kapursingh forest road on Thursday (January 12) and informed Mangalabag police, which started searching for her and later found her hanging from a tree.

Though the police suspect it to be a case of suicide, family members of Rajasree, a right-arm fast bowler and a middle-order batter, alleged that she was murdered “as the body bore injury marks and her eyes were damaged”. Accusing OCA of favouritism, the cricketer’s sister said she was deliberately excluded from the team despite being an all-rounder and a good performer.