Our Love For Chinese Food 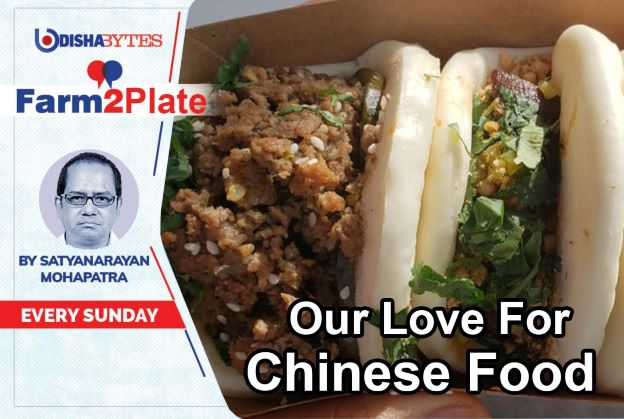 You have to set the alarm at 5.30 am to have the best Chinese delicacies for breakfast at Tiretta Bazar, Kolkata (previously Calcutta). Strangely, this area is named after an Italian Edward Tiretta who escaped from his country due to some political offence and established this commercial hub.

The Chinese only came in 1778 – when Yang Tai Chou landed with 110 tea workers to set up a sugar factory. The locals addressed him as Tong Achi, thus the area is popularly known as Achipur. His tomb draws quite a crowd during the Chinese New Year. There were many Chinese who came to India for jobs and each of them was helped personally by Yang Tai Chou.

The second wave of Chinese came to India from Fujian and Guangdong province during the opium war in 1839 – the Hakka people. Today we all know about Hakka noodles, which is quite popular in India. The credit goes to the Hakka people. But traditionally their job was shoe-making and today in Kolkata one can see few Chinese shoe shops which were established by these Hakka migrants.

Some Chinese people also came from Hubei province, most of whom were dentists. Their low charges attracted many to these dentists.

The Cantonese Chinese, one of the earliest Chinese groups that came to Calcutta, specialised in carpentry, and people who came from Shanghai were engaged in laundry business. They set up a laundry and dry-cleaning business, which is why one can see many Shanghai Laundry & Dry Cleaners around Kolkata.

Some Chinese people also started making sauces and Chinese pickles. Today the most famous manufacturer of Chinese sauces in Kolkata is Pou Chong, established in 1958. Two Chinese newspapers are also published from Kolkata.

The Chinese Civil War (1927-1949) and the Second Sino-Japanese War (1937-1945) caused food shortages, insecurity, instability and unemployment for ordinary citizens. People began emigrating from China to south-east Asia in droves and some ventured further south-west to India, where the presence of the Chinese community in Calcutta was well known.

Just after the Sino-Indian war of 1962, many of the Chinese prisoners were interned in Deoli camp in Rajasthan. These prisoners later migrated to western countries in Europe and America. Deoli was established as a garrison town by the British in 1854 at a strategic location to keep a watch over Jaipur, Ajmer and Kota simultaneously.

A prison was set up in the 1940s at Deoli to house Japanese and German prisoners of war (PoWs), which was later used for Chinese prisoners. This was the reason Chinese numbers in India dropped precipitously after 1962. Kolkata is the only city in India which has two Chinatowns – the old Chinatown is located in central Kolkata and new Chinatown in east Kolkata.

Often we think that the Chinese eat less spicy food, but the Chinese of Hunan province use much more spices than Indians. They love to add lots of roasted dry red chillies in their food. There is also a province in China named Harbin that has a great Russian influence on their cuisine.

China’s Xinjiang and Ningxia provinces have a big Muslim presence, so their food habits are very similar to our Mughal dishes.

Kolkata’s Nanking restaurant is India’s first Chinese cuisine restaurant. Founded in 1925 by the Au family, the restaurant hosted many Bollywood superstars like Raj Kapoor and Dilip Kumar. Nanking restaurants were sold and later abandoned in the 1990s. Though most of the old restaurants are closed, Chinese breakfast at Tiretta Bazar still remains a major attraction.

The Chinese residents of Tiretta Bazar in old Chinatown prepare the best mouth-watering Chinese delicacy for breakfast in their home and sell it in the market. They sell a variety of noodles, fish and meatballs soups, dumplings and spring rolls. The highlight of this place are the Bao or Bau – freshly steamed or nicely fried, with pork and other filling, served with hot sauce — and fish-ball soup as well as Ham Choi (salted vegetables), which is a must eat.

In Tiretta Bazar, there are many Chinese kiosks which sell Chinese breakfast and mini meals at a very competitive price, the most famous kiosk being Fat Mama. A Cantonese Chinese, by profession a carpenter, established a Chinese restaurant in central Kolkata named Chung Wah and this was the first proper Chinese restaurant in India which served authentic Cantonese variant of Chinese food. Now many European dishes have found their way in the menu, of which Fish Chowder is very popular.

If you are travelling to Kolkata, make a trip to India’s oldest family-owned Chinese restaurant Eau Chew at Ganesh Chandra Avenue. It was set up in 1920 by Chi Tian Huang and his wife, who migrated from Guangzhou. Eau Chew in Mandarin means ‘Europe’. In the earlier days this restaurant was very popular among the British. At present the restaurant is run by the fourth generation of Huang family, Joel Huang. They never share their spices and recipes with others and have never hired any cook.

Their signature dish is Chimney Soup. The soup container has a chimney in the middle with burning coals inside to keep the food warm. Joel Huang’s mother Josephine Li Ying Huang also invented a dish called Josephine Noodles — a pan fried noodles with seafood, meat and Shiitake Mushroom. Another popular dish is Pork Pineapple and pork ribs. If you are a fish lover, you can go for Fish with Chilli Black Bean.

Gobi manchurian, Manchow soup, chicken lollipop and chilli chicken are the Indo-China dishes which are very popular among Indians. Of late, a new Indo-China dish Honey Chilli Potato has joined the bandwagon.

Post 1950s, many local Chinese kiosks and restaurants mushroomed and gradually the authentic Chinese food turned into spicy Indian Chinese food, the best example being Chilli Chicken which doesn’t have any connection with China. Also Chicken Manchurian, which doesn’t have any connection with Manchuria of China. Chicken Manchurian and Manchow Soup have no relation with China’s Manchu cooking. Manchuria is the north-east region of China and the Manchu people’s food are very similar to Korean cuisine. Although they are Chinese, Manchu people have ancestors from Jurchen people of Korea.

Indo-Chinese items like Hot & Sour Soup, Chicken Lollipop are local creations. An Indian Chinese Chef Nelson Wang was born in Kolkata but later went to Mumbai and worked as an assistant cook in a Chinese eatery in Colaba named Fredrick’s. After that he joined as a chef in Mumbai Cricket Club. In 1975, a club member asked Nelson to cook something spicy and he tossed chicken pakoras in a red sauce with onions, green chillies and garlic, and poured some vinegar and soya sauce and created one of the most popular dishes, Chicken Manchurian.