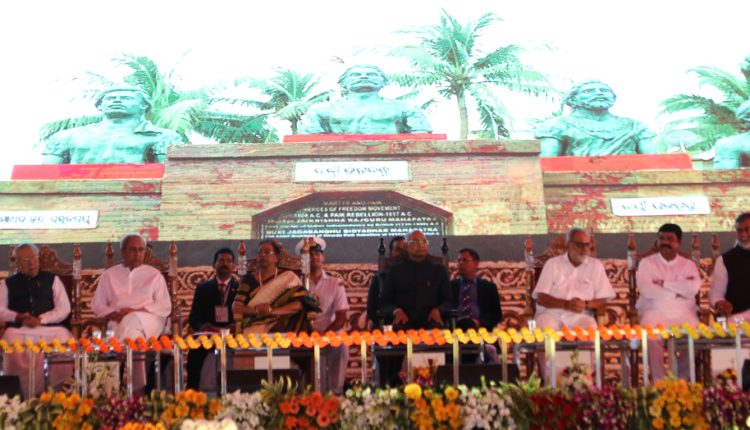 The memorial is being built to commemorate the famous armed rebellion under the leadership of Bakshi Jagabandhu in Odisha. It was the first war of Independence that started in 1817 much before the Sepoy Mutiny of 1857.

Going down history, here are some facts related to the historic rebellion against the East India Company’s rule:

The Paikas were the traditional militia of Odisha. They served as warriors and were charged with policing functions during peacetime.

The East India Company conquered Odisha in 1803 and dethronement the king of Khurda, Raja Mukunda Deva. In 1804, the Raja planned a rebellion against the British in alliance with the Paikas, but the plot was soon discovered and his territory was confiscated.

With the fall of Khurda, the power and prestige of the Paikas decreased. They were alienated by the British regime, who took over the hereditary rent-free lands granted to them after the conquest of Khurda. For instance, Bakshi Jagabandhu’s familial estate of Killa Rorang was taken over by the British in 1814, reducing him to penury. The Paikas were also subjected to extortion and oppression at the hands of the company government and its officials.

The extortionist land revenue policy of the company affected the peasants and zamindars alike. A source of much consternation for the people was the rise in prices of salt due to taxes imposed on it by the new government. The company also abolished the system of cowrie currency that had existed in Odisha prior to its conquest and required that taxes be paid in silver. This caused much popular hardship and discontent.

In March 1817, a 400-strong party of Kandhas crossed over into Khurda from Ghumsur, openly declaring their rebellion against the company’s rule. The Paikas under Bakshi Jagbandhu joined them, looting and setting fire the police station and post office at Banpur.

The rebels then marched to Khurda itself, which the company abandoned, sacking the civil buildings and the treasury there. Another body of rebels captured Paragana Lembai, where they killed native officials of the company.

The uprising spread rapidly across Odisha, and there were several encounters between the British and Paika forces, including in Cuttack and Puri. During the conflict, the freedom fighters projected Lord Jagannath as the symbol of Odis unity.

By May 1817, the British managed to re-establish their authority over the entire province. The British posted judges to Khurda to sentence the captured rebels. They were awarded sentences of death, transportation and long-term imprisonment. Between 1818 and 1826, the company’s forces undertook combing operations. Bakshi Jagabandhu was captured by the British in 1825 and lived as their prisoner in Cuttack until his death in 1829.

Other Revolts in Odisha

The Paika rebellion in Odisha was followed by the freedom struggle by Tapanga in 1827 and the Banapur Rebellion of 1835. Other major violent uprisings against the British was followed by two separate Kandha uprisings under Dora Bisoi and Chakra Bisoi, the Kol rebellion, the Sambalpur uprising led by Veer Surendra Sai and Gond sardars and the Bhuyan uprising under Dharanidhar Naik.