Parents Counselled On Safety Of Children At Home Or Outside 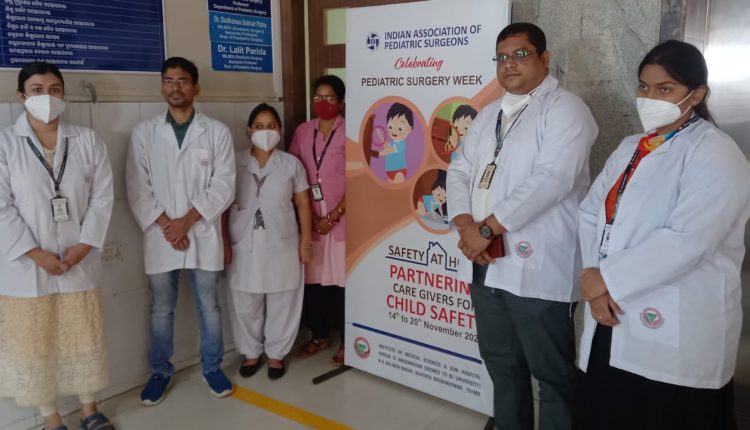 Bhubaneswar: Safety of children, whether at home or outside, should be the priority of parents.

Doctors at Institute of Medical Sciences and SUM Hospital here counseled parents and asked them to keep a watch over their children. “Children are susceptible to accidents, whether at home or on the road or at school. Their safety should be uppermost in the minds of their parents and guardians,” said Prof. Antaryami Pradhan, Head of department of Pediatric Surgery at IMS and SUM Hospital here.

He was speaking at the end of a week-long ‘Paediatric Surgery Week’ which concluded at the hospital on Saturday. Many children were being brought to the hospital with injuries suffered at home or outside. But, all should be watchful so that such accidents are avoided, he added.

The Paediatric Surgery Week is observed every year from November 14, celebrated as Children’s Day, by the Indian Association of Paediatric Surgery, said Associate Professor in the department, Dr Sudhansu Sekhar Patra.

This year’s theme for the week was ‘Safety on road, safety at home, safety at school.’

The doctors interacted with children and their parents in the OPD as well as in IPD regarding child safety knowledge and practices, Prof. Pradhan informed.

Parents were advised to ensure that sharp and pointed objects were kept out of reach of children, Prof. Pradhan said. In case any unfortunate accident occurred, they should rush the child to hospitals, and IMS-SUM Hospital has a 24-hour trauma care service with most modern treatment facilities, he added.

Among others, Prof. Hiranya K Mohanty, Associate Professor Dr. Lalit Parida and other staff members were conducted the week-long programme.

#GadgetFreeHour Seeks To Strike A Chord On World Children’s Day