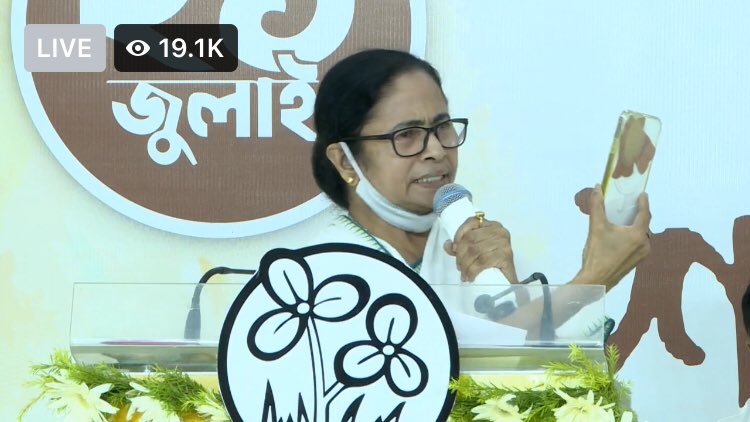 Kolkata: West Bengal Chief Minister Mamata Banerjee waded into the snooping controversy, stating that the BJP wants to “turn India into a surveillance state” instead of keeping it a democratic country.

“Our phones are tapped. I have put a plaster on my phone camera now, look. They use the camera to listen to our conversations. Pegasus is dangerous and ferocious. Sometimes I cannot talk to anyone. I can’t even talk to the chief minister of Delhi or Odisha. It is time we put a plaster on this government, or the country will be ruined,” Mamata said, showing a taped mobile phone.

Among the targets chosen for surveillance, according to the Pegasus Project reports, is the number of Mamata’s nephew and important party leader Abhishek Banerjee.

“Spygiri is going on and BJP has bulldozed our federal structure. Phones of ministers and judges are being tapped. They have finished the democratic structure. Pegasus captured the election process, the judiciary, ministers and media houses. Instead of a democratic state, they want to convert it into a surveillance state…You are paying too much money for spying. We should also plaster the Centre, otherwise our country will get destroyed,” Mamata said while addressing a virtual gathering to mark Martyrs’ Day in the state.

Appealing to the Supreme Court to take suo moto cognizance of the alleged surveillance operation using Pegasus spyware, Mamata called all opposition parties to form a united front to fight against BJP and “save democracy” in India ahead of the 2024 general elections.

Mamata added that she I will be in Delhi next week and wants to meet opposition leaders during the ongoing Parliament session.

“I propose you call a meeting of opposition leaders between 26-28th of this month. We are keen to attend it,” Mamata said.

Martyrs’ Day is observed on this day in honour of 13 West Bengal Youth Congress workers who were killed in police firing on July 21, 1993, during a demonstration led by Mamata, who was then a Youth Congress leader.