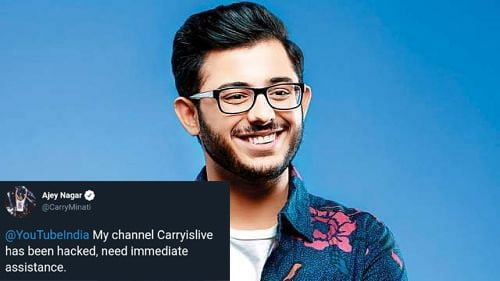 Carryminati, who recently became the most popular Indian YouTuber with a whopping 24.1 million followers, took to Twitter on July 25 requesting Youtube India to help him, reported The Indian Express.

Allegedly, the hackers changed description of the account with account details for bitcoin donation. The hackers are also said to have streamed the fundraising Gameplay for Assam and Bihar flood victims with the Bitcoin address to trick subscribers. The charity stream raised over Rs 10 lakh along with a personal donation of Rs 1 lakh by Ajey himself.

YouTube blocked the hackers and gave back Carryminati the control, as confirmed by a second tweet by the 21-year-old YouTube star. The hackers are yet to be identified.

My channel is now back with me! I don’t know who did it & why but thanks to youtube for their immediate support.

While it is accounts and channels of celebrities or prominent people being hacked is nothing new, Carryminati fans took to Twitter expressing discontent and holding YouTube responsible for the hacking.

Twitter had earlier faced a bitcoin-hack scam when accounts of personalities like Elon Musk and Barack Obama were hacked.