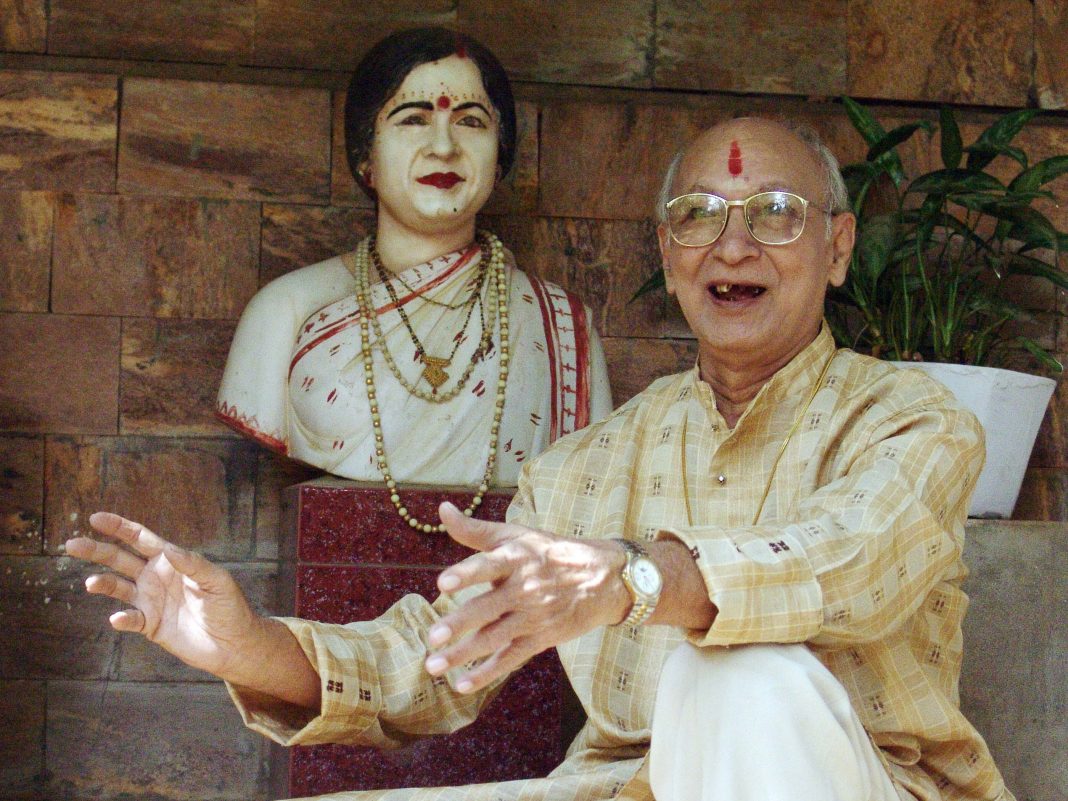 Pandit Panigrahi’s effort to popularise ’Geeta Govinda’, which has been hailed as the fountainhead of Odissi music, globally, is a part of Indian music folklore.

He was the first Odia singer to be honoured by the French government for his ‘Geeta Govinda’ composition way back in the 70s. But it was only in 2010 that he was recognized with the Padma Shri, considered by many as a belated honour for the great master.

Besides his achievements in life, he was known for his simplicity, affable nature and plain speak. Not one to dabble in politics or lobbying for awards, he had dedicated his life to disciplined pursuit of pristine music intertwined with spirituality and complete submission to the Supreme.

Pandit Raghunath Panigrahi enjoyed a highly successful, paying and promising career in Chennai as a playback singer for Telugu and Tamil films and had worked with all the greats of the South music industry. He decided to give up a flourishing career to team up with his wife Sanjukta Panigrahi, who was then dreaming of launching a worldwide campaign to popularise Odissi dance. The legends did not buckle under the pressure of building an international repertoire of Odissi dance and music at a time when there was hardly any media support, infrastructure and endorsements. They continued to pursue the ‘great dream’ together and gave Odissi an international reputation and opened global vistas for Odia art and culture.

The culture of Odisha in many ways is synonymous with the ‘Odissi emissary duo’ Pandit Raghunath Panigrahi and Sanjukta Panigrahi.

Gotipua was popular in the villages and was mostly performed by boys. Maharis, or Devadasis, danced before the idol to the accompaniment of mantras. They evolved to dancing to vocal music when Jayadeva composed his famous ‘Geeta Govinda’ celebrating the life and times of Lord Krishna. This dance form, accompanied by the music in the Geeta Govinda, the contributions of the duo, Pandit Raghunath and Sanjukta Panigrahi,gave rise to emotive expression or abhinaya, an integral part of present-day Odissi.

The dance form had come out of the confines of temples during the time of Chaitanya Mahaprabhu, the seventh century sage, but was made contemporary in the world of art and culture by the Panigrahis, the first Padma awardee couple of Odisha.

Sanjukta Panigrahi passed away in 1997. Incidentally, Raghunath breathed his last, a day after his wife’s death anniversary in 2013. It was truly a partnership of creative genius, and it was impossible to imagine one without the other. The 1970s and ’80s saw them at their peak.

Born at Gunupur in Odisha’s Rayagada (undivided Koraput) district, Panigrahi, under the tutelage of his father and uncle, learnt the classical way of singing ‘Geeta Govinda’, which describes the unique relationship between Lord Krishna and the ‘Gopis’, as preserved in the traditions of the Lord Jagannath Temple in Puri.

Trained in both Hindustani and Carnatic styles, Panditji was not just a vocalist but also a versatile composer whose work covered a wide range of forms. His soulful rendition of Jayadeva’s ashtapadis remains a class act, and his dance compositions were outstanding for their choreographic achievements. His dexterity with diction and languages and the ease of phonetics in them made him unique. In particular, his rendition of ‘Ramcharitmanas’ is considered an ageless masterpiece.

An outstanding singer of the Odissi genre, Panditji, as he was popularly called, was not just a vocalist but also a versatile composer whose work covered a wide range of forms. Besides carving a niche in the world of classical music, he was conferred with the ‘Suramani’ (the bejeweled voice: a title given to him for his seamless, flowing voice) title. His Odissi light classical renditions like ‘Na Jaa Radhika’ and an out-and-out modern love song like ‘Nali Nali Ei, Krushnachuda’ or ‘Nupoor Bajaai Kie’ are gems. For many, his rebellious dialogue with the Lord Sabu Thiru Banchita Kari..’ is a moving tribute to his range and bhava.

Such was his dedication, devotion and submission to music that once, he recounted, in 1954 he was successful in warding off an impending storm in Koraput where there was a national gathering on the occasion of All India Tribal Conference under the Chairmanship of Pandit Govind Ballav Pant. As people started arriving the national event, there were dark clouds and strong wind started to blow. This would have meant disaster for the All India Tribal Conference and hence Pandit Pant, requested his father to do something to invoke divine blessings so that the event passed off peacefully, without any dislocation and trouble. On his father’s request Pandit Panigrahi started reciting the ‘Om Parashakti Mahashakti Om’ and within a few minutes the dark clouds disappeared and the conference proceedings did not face any problem. This was his belief in music.

We remember him today, as the architect of Odissi’s renaissance, a guileless devotee of music and an institution, inspiring next generation with his talent, discipline and inventive artistry.

Let’s bow to the Sangeet Siromani.