Ranipur-Jhariyal: A Larger Than Life Abode Of Yoginis In Odisha 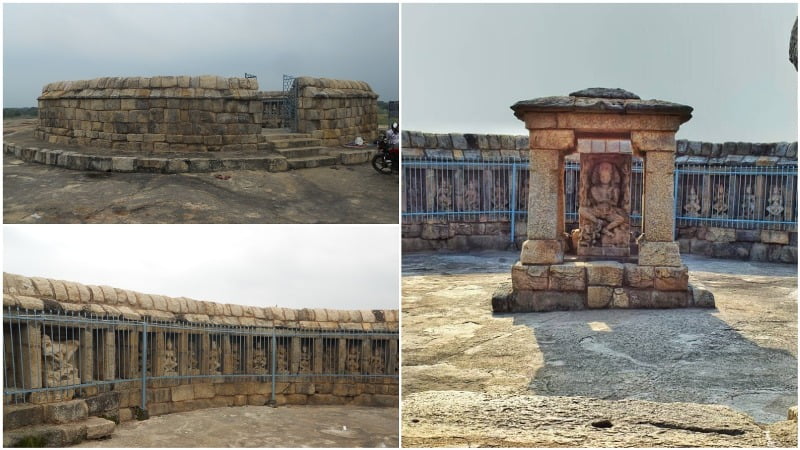 Bhubaneswar: Deep in the hinterland Odisha, and several miles away from the nearest town Titlagarh and 104 km from Balangir, is a rocky outcrop between the small villages of Ranipur and Jharial.

With a classical circular structure with missing roof, this is one of the most mysterious temples of Odisha. It has a diameter of approximately fifty feet, making it twice the size of the Hirapur Yogini temple in Bhubaneswar.

The Ranipur-Jharial temple was built with coarse-grained inferior sandstone, which are a bit eroded.  nowThe temple is said to have been constructed somewhere around 900 AD, as is suggested by the Somesvara shrine at the foot of the hill alongside the tank.

The past importance of this site can be gauged by the remains of a number of small stone temples built upon the rock, one large brick temple nearby, and also a site with Buddhist relics in the vicinity.

The crowning glory of the rocky mound in the circular temple of 64 Yoginis is a large natural tank, which appears to have been a significant place of pilgrimage a 1,000 years ago. An inscription in a temple on the embankment tells us that bathing in the waters of this tank, known as Somatirtha, absolves a person of all sins. This temple is a combination of religious faiths of Saivism, Budhism, Vaisnavism, and Tantrism.

The unique aspect of Yogini temples are their intricate sculptures. The temple is adorned with a large proportion of animal-headed Yoginis, with 14 such heads clearly distinguishable like the one with a cat head, or an elephant head. The images of the goddesses are rather odd, but extremely erotic with prominent physical features. One might as well feel scared and curious at the same time while examining these magnificent sculptures. The images are large and all the Yoginis are shown dancing, each striking an identical pose. The positioning of the legs is basic to all Indian classical dance and is a stance assumed at the start of each set of movements.

Shiva And The Urdhva Linga

There are 64 niches in this temple, and at its centre, there is the original small roofed pavilion, which is still relatively intact, housing an image of Lord Shiva dancing. The textual concept of Shiva at the centre of a circle of Yoginis is thus followed here exactly. However, the fact that Shiva and the Yoginis are dancing appears to be a novel iconographic arrangement. Shiva has three faces and eight arms and is shown with urdhva linga (erect phallus). Ganesha and the divine bull Nandi are also carved along the base of the image. While the main entrance to the temple is a simple opening on the east, there is a secondary entrance on the south nearly filled with stone blocks similar to those used in the structure.

It is suitable for group adventures and to spot colourful wildlife like tigers, deer, bears, foxes, elephants, and wild birds. Kumuda Padad, a natural splendorous place, is also very popular with tourists. This hilly area is considered to be the abode of Lord Dhabaleswar and has big natural spacious caves spread across an area of 80 feet by 40 feet. Kumuda Pahad is only half a kilometre away from Titlagarh and offers a good place to stay.

Mahashivratri: Know The Timing Of Mahadipa In Major Shiva Shrines In Odisha