Scrolling Down: The Holy Grail Of The New Economy 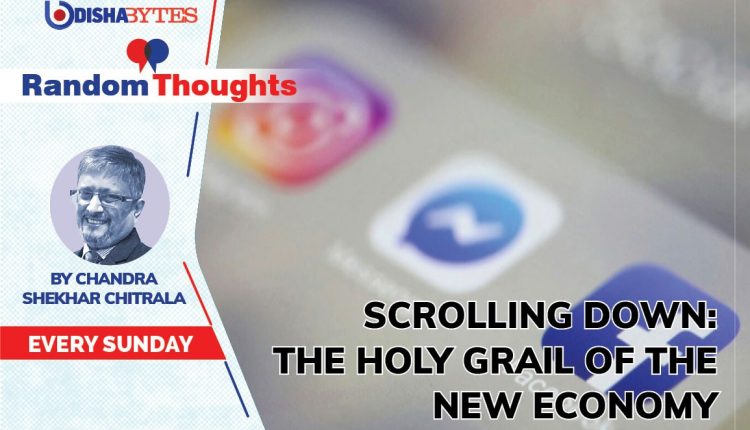 Last week was very interesting in the world of social media. While the FB/WhatsApp/Instagram behemoth went down at least a couple of times, with the first outage lasting over six hours, it also saw some scathing revelations by former Facebook Data Scientist Francis Haugen.

For most of us, it would appear a minor issue – a problem faced by a private company that doesn’t really affect us. After all, they are nothing more than something we use for passing our time – sharing pictures, sending and receiving messages or humble bragging about our latest possessions, accolades or vacations.

However, a closer look at the company’s numbers reveal a different picture – maybe even a cause for concern when we see that nearly 3.5 billion, or almost half the entire population of the Earth use these platforms.

It is estimated that Facebook (FB) lost nearly 10 million USD for every hour it was down in advertising revenues. The rule of thumb for marketing Return On Investment (ROI) is typically a 5:1 ratio, but considering that FB is a dominant player, we could assume a conservative estimate of 3:1. In other words, when a business invests say 100 USD in a FB advertisement, they should get business worth at least 300 USD. Based on these figures, the estimated loss to businesses who depend upon these social media platforms can be guesstimated at 30 million USD per hour.

In 2020, Facebook made 85.97 billion USD in revenue and we can estimate that they helped their customers’ businesses generate nearly 430 billion USD.

Large numbers sometimes are difficult to comprehend, so put another way, as per World Bank figures, Facebook’s turnover in 2020 was more than the entire year’s GDP of Sri Lanka, which stood at around 80.71 billion USD. And from the data available for 176 countries for the year 2020, we can see that Facebook’s turnover was more than the national GDP of 115 countries, and what’s more, it was greater than the GDP of the bottom 36 countries taken together.

If we go by our guesstimate of an ROI of 3:1, it has helped generate business turnover almost equal to the GDP of Pakistan i.e. 263 billion USD or the combined GDP of the bottom 53 countries.

When figures of these magnitudes are at play, we need to pay attention, for they have the power to drastically alter our lives.

As stated by Ms Haugen revealed through leaked documents, Facebook actually encourages toxic content in its drive to generate profits.

For most of us, this may appear as an outcome of employees of these social media platforms making conscious decisions regarding the generation, sharing and visibility of content that is overtly or covertly hurtful in nature.

However, this may not be completely true. The reason for the popularity of platforms like Facebook is the extensive use of Artificial Intelligence in the curation and customization of content.

This is done not just on social media platforms but also on e-commerce platforms like Amazon and Flipkart in order to encourage the user to keep scrolling down to see more content.

Unlike what we may assume, this simple act of using our fingers to scroll down is what the new economy companies focus primarily on. For the more we scroll down, the more advertisements we see, the greater the chance that we come upon something that triggers a purchase instinct.

Curating and customizing content in this manner is impossible to do manually, but with Artificial Intelligence, it becomes ridiculously easy. For the algorithms learn from everything that we do – when we open the app to the rate at which we scroll down, what we like, what makes us angry, what makes us sad, what we read, what we ignore, whose posts we react to, how much time we spend on a post, which pictures we zoom in on… The list is endless.

What is worrisome is that by automating the learning engines, it is very much possible that the self-learning AI algorithms invariably learn our biases, and based upon what is learnt, appropriate content is shown to us, further reinforcing our prejudices, and thereby creating a vicious loop that can end up destroying much of what we as a nation hold dear.

When such powerful tools exist, it is only natural that their use is not limited only to commercial organizations seeking to increase their sales but also for promoting political, religious and other such thoughts and ideologies. And this is where the problems arise – do these platforms have the responsibility of deciding what is right and what is wrong? Should they prevent the dissemination of content that is toxic? In that case, who defines what is toxic?

Take the internal FB document that was leaked – “Adversarial Harmful Networks – India Case Study”. Among other things, the study stated that Facebook was seen as the preferred social media platform for spreading “fear-mongering anti-Muslim narratives” in India by posting content that may even be fake, by a few persons affiliated to the RSS, using multiple accounts. Depending upon who we ask, the veracity of the content, as well as the ultimate purpose of such posts, would vary from good and necessary to toxic and incendiary.

Regardless of what the governments decide, ultimately it depends upon us to understand that the primary objective of any corporate body is to generate a return on investment, or in other words, profit, for its owners. Expecting them to play the role of moral guardians may not be wise for us as a society, and in order to ensure our own well being as well as that of the world we live in, we need to apply our minds to whatever we are exposed to, before acting upon it.

Odisha Schools To Reopen Next Month? Teachers Asked To Take…