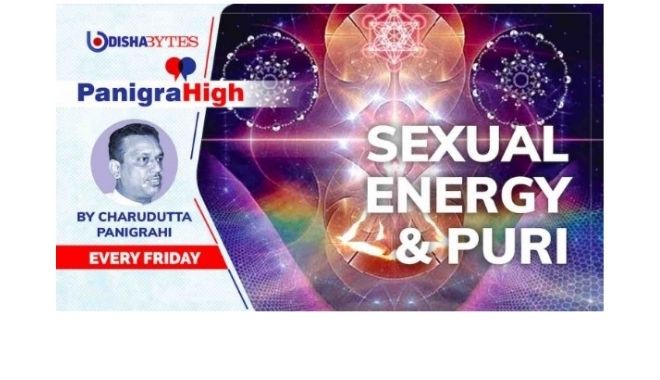 I have experienced Puri as a way of life. It is not only a place to live or visit. The sexual energy that pervades in Puri is intense, powerful and controlled because there is conscious effort everywhere to transcend the raw energy and move it up the spine. There is a deep-rooted dislike for alcohol, junk food and non-vegetarian food (except fish). The inhabitants are proud of the fact that they have been able to keep themselves away from titillating or stimulating food and drinking habits. The divinity accumulates the energy and directs the energy to higher elevations. This is what the locals believe in and practice. Aberrations are there but Puri is where one would witness a direct link between piety and day-to-day life or the spiritual and the pragmatic.

There is no higher energy than sexual energy, but mostly we ascribe biological reproduction as its only function. The same energy can have different creative dimensions and possibilities. It is the energy human is born out of; and so, everything is born out of it. In Puri all over the city and the nearby towns and villages art and creativity is original and in abundance. This creativity is the fountainhead of Odisha’s culture. The same sexual energy joined with meditative practices has been sublimated to the highest peak of consciousness or enlightenment in various forms. Art and craft is one. The art, crafts, handicrafts, handlooms and architecture of Puri is distinct in style and commonplace in every household. So common that you realise how energy channelisation has been imbibed into everyday life, normally without much fuss. A whole culture is built around restrain and energy management.

I am awestruck by two unique elements in Puri – one, the motifs, and the other, the colours used. In the Pattachitra paintings, palm leaf paintings, or even in applique work, the motifs are human figures and animal figures which are full-bodied, robust with clear expressions. The eyes for example are well rounded, with full glare. The confidence of the characters shows in their postures also – straight and decked up. The well-shaped curves and bodies are flaunted. In this dedication to art, I sense the tremendous transmutation of sexual energy. Transmutation of our sexual energy leads us into quite an advanced practice where the sexual energy existing on many levels is to be pooled — many levels like the physical, mental, emotional, and even astral. This is a journey from the base to the highest, from the root of the spine to the crown of the head. This energy flow reflects in the motifs. Many I know in Puri lead such a spartan lifestyle despite being unbelievably creative that they have never felt the requirement of a great deal of awareness, particularly of one’s own sexual energy. They are perpetually and physically aware of that build of energy and its higher journey – from the root chakra, Muladhara, to the final chakra Sahaswara. This connection between divinity and art is gloriously established in Puri. The motifs depict restrained passion. Puri is not a geography, it is a state of high life.

In Odissi (the classical dance form of Odisha), there are magical interplays between soft, careful steps and vigorous, high energy veins. This alteration creates a balance in energy. This is another form of dynamic meditation which consists of obvious deep fast chaotic breathing, silence, emoting and dancing. It is proven that dynamic meditation considerably reduces aggressive behaviour, anxiety, stress and depression. Odissi originates in Puri and from Mahari dance, an expression of ultimate love for the creator of the cosmos. Gotipua dance is purely based on the balancing act of the body and the mind and is encouraged specifically among young boys, who start very early in life. Gotipua dance keeps the dancers fit, lean, flexible and utterly creative. No gender disparity in art and no repression of sexual energy. Breath, sound and movement create this amazing energy field.

Puri is an energy field – the central area is like a special conch shell with the hollow part on the right side – having an area of about 20 square km (keeps extending as we keep building townships) of which some part is submerged under the sea. The temple is at the navel of the land parcel. The navel is the area of the body which represents the Manipura Chakra. The navel is an energy generator and has the aura of the source of personal power. It governs self-esteem, warrior energy, and the power of transformation of vital force. The element of this Chakra is fire and the colour are yellow, bright like the sun. Hence most of the colours used in paintings, fabrics have colours in tandem with the energy nuances. Everywhere in Puri, the energy play is palpable.

The wrestlers mostly use red loincloth, kachia, which symbolises celibacy and control in life. Wrestling and the associated discipline in life transform energy and build character. A young wrestler is a pride for the family because it is this pledge of wellbeing that shapes the future generations of the family. It is a great honour because the lad has identified the energy centre and the ability to handle energy waves. A red kachia and a red tika (mark on the forehead) demonstrate the co-existence of high power  and rootedness. So sacred is the energy that the wrestlers take a vow of celibacy and worship and offer the kachia to their most-loved Hanuman. Life starts much before sunrise at about 4-4.30 in the morning at the Jegaghar. It is the local club where the senior mentors the wards in disciplined pursuit of wrestling, bodybuilding and gymnastics. Even today when outdoor activities are hijacked by internet shows, Puri boys are not ashamed of flaunting their practice of 1000 dandas (push-ups), 25km running (jogging in the beach sand), 1000 baithiks (squats), hours of wrestling practice in specially prepared wrestling space in fine soil (with liberal portions of clay). The rest of India holds this in awe. It is not only about physical exercise and workouts. Besides wrestling other activities like practising classical music, instruments like Pakhawaj (similar to the Mridangam in southern India), vegetable colour dyeing of gamuchas (loincloth), painting on Pattas or other mediums have been common in these hubs. The women of the society do not have much access to Jegaghars, as the responsibility of providing physical security and safeguarding the society was deemed as primarily a man’s job. Jegaghars are the erstwhile barracks and training grounds for soldiers (paikas). Besides wrestling, the households are proud to have their children join defence forces.

Cunningham had mentioned that the ancient name of the town was Charitra. If true, the name is so appropriate. Puri echoes the character, Charitra.

Puri knows the art of converting sexual energy into spiritual enlightenment. Immerse and experience because everything can’t be expressed.