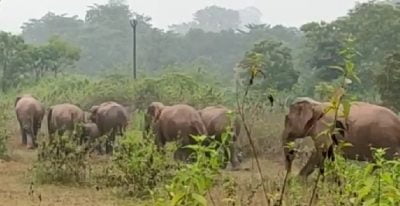 Bhubaneswar: The Special Investigation Team (SIT), which is investigating elephant deaths in Athgarh and Satkosia forest divisions in Odisha, has sought extension of its term.

Stating that its investigation into the death of elephants and recovery of their skeletal remains in the two divisions had not been completed, the SIT sought extension of its term by one more month.

“We have urged the government for extension of the SIT’s tenure to further delve into the mysterious deaths of pachyderms. The extension of tenure will help take the probe to a logical end,” Times of India quoted an SIT member as saying.

The SIT, which was formed on June 16, has arrested a member of a gang suspected to be involved in elephant poaching and interrogated 3 divisional forest officers (DFOs).

Meanwhile, the Orissa High Court on Monday directed the principal chief conservator of forests (PCCF) (wildlife) to file a fresh affidavit on elephant poaching in the state in the last 5 years. The High Court issued the order after expressing dissatisfaction over the affidavit filed by the Forest department.

In response to the HC order issued on July 5, the department filed the affidavit.  It stated that 14 cases of poaching of wild elephants have been reported to the authorities, out of which 4 cases relate to death of female elephants and 10 cases are killing of male elephants from 2017 to 2022. In this regard, 30 persons involved in the poaching have been arrested and forwarded to the court. Further, 11 cases have been booked under the Wildlife (Protection) Act, 1972 out of which 5 cases are under trial in courts and 9 cases are under investigation. The authorities have recovered 17 tusks relating to 9 cases.

The Court found the particulars to be a vague and directed the PCCF (Wildlife) to file an affidavit providing the details of each of the instances of illegal poaching of elephants in the last five years including the following:
– the place/region where the incident took place
– the actual action taken i.e., in form of registering an FIR (with the case number)
– listing of the suspects/accused persons
– arrest of the accused persons
– filing of charge sheet with the details of the Court where the case is pending
– the status of the trial and whether there had been any conviction in any of those cases

-the present composition of such Wildlife Crime Cell
– the actual number of cases it has itself investigated which have resulted in a trial and conviction of the offenders.

The court directed the PCCF (wildlife) to file the affidavit within two weeks and told him to remain present in virtual mode on the next date to answer the queries of the court. The next hearing was posted to August 8.

Neeraj Chopra Pulls Out Of Commonwealth Games; Know Why