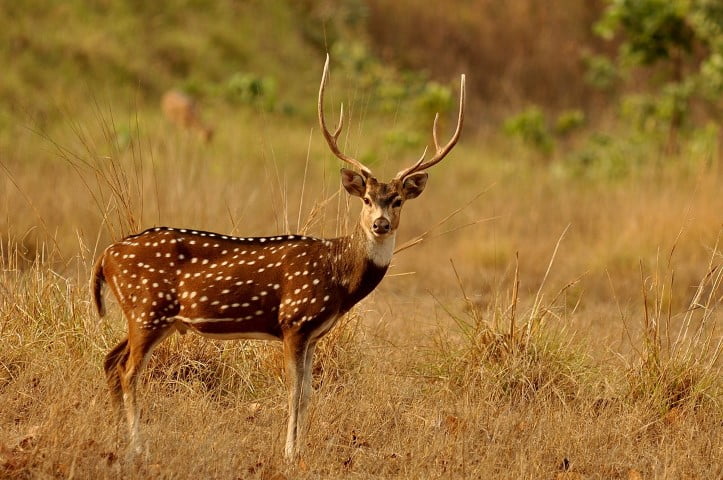 Almost all the 4,000 spotted deer, except one, are alive and beginning to recreate their habitation inside the Konark-Balukhand sanctuary, puzzling officials at the only man-made forest reserve in the country. It was believed that the park had been stripped of its rich flora during the devastating cyclone Fani.

“We divided our group into eight teams who combed the now devastated forest for the last two to three days. To our surprise, all spotted deer have been accounted for, including the carcass of one,” forest officer Bhimsen Das told Odisha Bytes after returning from the post-cyclone assessment audit.

According to Bhimsen, cashew trees might have protected the deer that took shelter under it from nature’s fury. “What we presume is that as the tall branches began to fall under the impact of the cyclone, the growing-up cashew trees underneath acted as a shield and gave them protection”.

Forest officials were also surprised to see a good number of animals escaping into the nearby habitation even before the cloud cover was beginning to build up. “They could sense the ominous signs. On the eve of the cyclone, I saw a herd heading towards the periphery areas. Maybe it was a sign of things to come,” said a worker inside the sanctuary.

“The ferocity of the winds was unprecedented. It was unimaginable, more severe than the 1999 Supercyclone,” he said, recalling the horror that unfolded in front of him on the fateful day on May 3. “The tree branches were hurled across like flying missiles, as the cyclone swept across the shores. Within hours, the green cover had vanished. The tidal waves did not inundate the forest but it was almost close,” he said.

The sanctuary stretches for miles along the Konark-Puri marine drive, acting as a buffer for the coastal areas from the high-velocity winds. Cyclone Fani had ravaged almost the entire forest cover.

According to Bhimsen, 80 lakh trees were destroyed in the cyclone. Out of this, 70 per cent were felled and 25 per cent uprooted. The remaining standing trees have no leaves left.

The Divisional Forest Officer had conducted a review meeting on Sunday to assess the damage and the next course of action. Balukhand sanctuary is closed to visitors now.

Bhimsen said Balukhand is India’s first man-made sanctuary and was accorded its present status on April 23, 1984. The sanctuary is home to casuarina, tamarind, anacardium, karanja, polanga, neem and other trees. Apart from the spotted deer, black bucks, antelopes and jackals are also found here.

Forest officials feared that day-to-day sustenance of the animals would become a grave issue as the food chain has completely been destroyed. “They (the animals) emerge from their hideouts late at night in search of food. But we are not sure, what’s next for them,” said the forest worker.

Poll Results Announcement To Be Delayed In Odisha: CEO